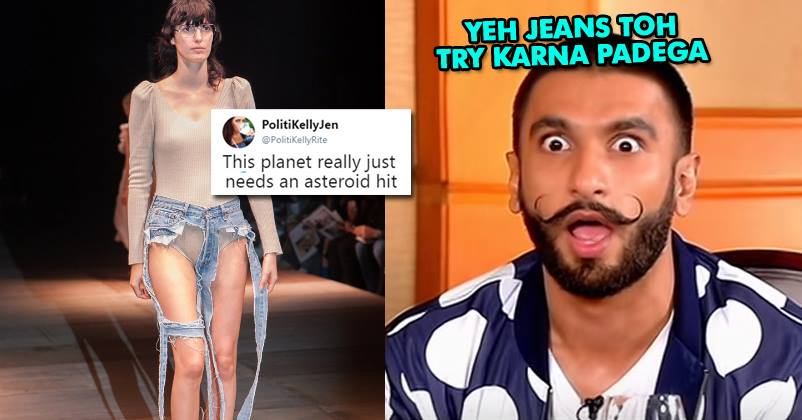 While there is a major portion of world population for which, clothing is a way to cover body and protect it from dirt and diseases. But there is a large section of people for which clothing is a style statement.

This style statement is created by designers who take their profession as an art and always try to research and found new ways an outfit can look.

Every design has some great imagination and deep work hidden behind it which very few are able to notice.

At the Amazon Fashion Week, a Tokyo based designer Thibaut’s launched his ‘Thong Jeans’ collection but to his surprise, Twitter is far from amazed with it.

In fact, his design has become a topic of fun recently on the social networking site. The design may or may not have got many admirers but the reactions on Twitter are surprising for sure. Take a look at some-

Thong jeans??? First of all, I'm not paying full price for jeans that look like they were destroyed by a bear. pic.twitter.com/zONC9XtACf

Who is going to wear "Thong Jeans" designed by Thibaut? This kind of fashion is ridiculous. pic.twitter.com/u88xXc2xWP

When an Indian mother gives her daughter that traditional dress which had been wore by her,her mother & her granny and so on.#thongjeans pic.twitter.com/zxOUmuNtUt

Hai rabba wondering what will be next after thong….by now even jeans might be scared😈😂😂😁😁😀😈😈😈😈

These #ThongJeans remind me of a game my kids play. Baffled by #PreRippedJeans, they invent other products that are sold pre-broken.

What do you think about this? Do you think these kind of jeans can be adpated in the real life and practically on what event you would like to wear it if yes?

Continue Reading
You may also like...
Related Topics:Fashion, Thing Jeans

Bihar Education Board Failed A Class 10th Girl Twice. Fined Rs 5 Lakhs After Getting Proved Wrong
It’s Not Compulsory To Stand When National Anthem Is Being Played In Cinema Halls, Says SC