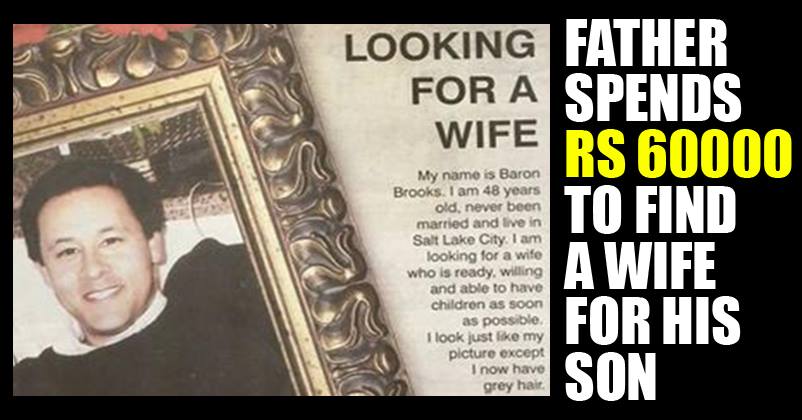 This is seriously heights of embarrassment and desperation! Yes, a father who is too desperate to have a grandchild has done something which has embarrassed his son a lot. Eager to know what he did? Well, he spent $900 i.e. around Rs 60,000 to find a wife for his son who is 48 years old. Do you want to know what he did? Well, he gave a full page ad in the newspaper and described various criteria like political views, height and age. Moreover, those women who matched this criteria were invited for an interview.

Baron Brooks, a businessman in Salt Lake City was shocked to see this full-page ad given by his father in North Idaho newspaper. Baron says that as soon as he saw the ad, he figured out that it was his dad Arthur Brooks (78) who had done all this. What the About You section states!

“You will probably be between the ages of 34-38 but that can be flexible. You will be attractive being height and weight proportional. Ideally, you will have no children from previous marriages but that is also flexible”.

Further, talking about the criteria…

1. You must be willing to move to Salt Lake City as that is where my business is located.

2. You must be politically conservative. This is very important to me. If you voted for Obama or plan to vote for Hillary you are not for me!

5. I would expect that if we have children you would be a stay at home mom

Talking about how it feels to see this ad, Baron said; “My father did this without my consent. I can’t even describe to you how embarrassing and ridiculous this is,”

He further adds that he is pretty angry with his father but at the same time doesn’t wish to hurt his feelings. Hence he would proceed with the interviews. As per the ad, the interviews were held at a resort in Coeur d’Alene on Saturday.

Baron expressed dissatisfaction over this and said;

“And then I’ll have words with my father separately. Who knows, it can’t hurt. Who the hell knows? What am I supposed to do? He already did it. No sense in defusing a bomb once it’s already gone off,”

On the other hand, Arthur said he wouldn’t comment anything about the advertisement till Sunday i.e. till he finds a perfect match for his son.

Describing his dad as ‘passive-aggressive’, ‘neurotic’, and ‘nuts’ Baron says;

“That’s my dad: stumbles into stuff, has a loud mouth, thinks he does the right thing, and then it all blows up in his face,”

Basically Arthur has been ill these days and hence is very desperate for a grandson who would carry the family name. Talking about the selection of newspaper, Baron says that his dad had recently been on a vacation to Coeur d’Alene and hence might have been drawn to the politics there.

Baron, who is a Jewish says “He knew I’m a political conservative, OK? And most Jewish girls are quite liberal, and that doesn’t work for me,”

So guys, what do you have to say about this funny ad? Do drop in your comments in our comments section below.

This 26 Year Model Married A 62 Years Old Guy & The Reason Is..
20 Most Commonly Used Short Hands In Chatting