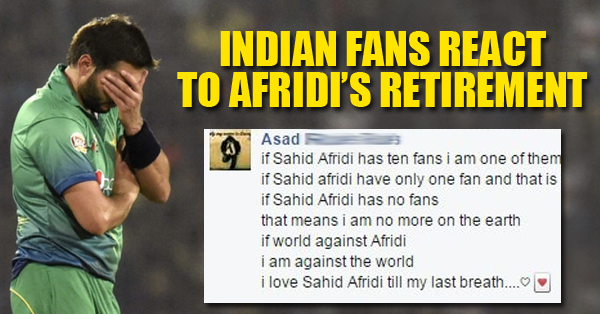 Shahid Afridi famously known as Boom Boom Afridi is considered as one of the greatest in Pakistan cricket history. He is well-known for his aggressive batting style and regarded as one of the greatest hitters of cricketing world. Debuted in 1998, Shahid Afridi has played many match winning knocks for his country including the in-famous World T20 in 2009. This friday Boom Boom will play his final international match vs Australia in the World T20 2016.

He announced his retirement after his team lost to New Zealand on Tuesday. We posted the above image on our page and here’s how Indians reacted to his retirement announcement.

Divided by Countries, United by Cricket. We will surely miss you LALA \m/.

‘Jai Pakistan’ On WhatsApp Chat And Students Were Jailed! Check It Out !
65 Year Old Grand-Father Kills His Grandson , Then Himself And You Can’t Imagine Why….