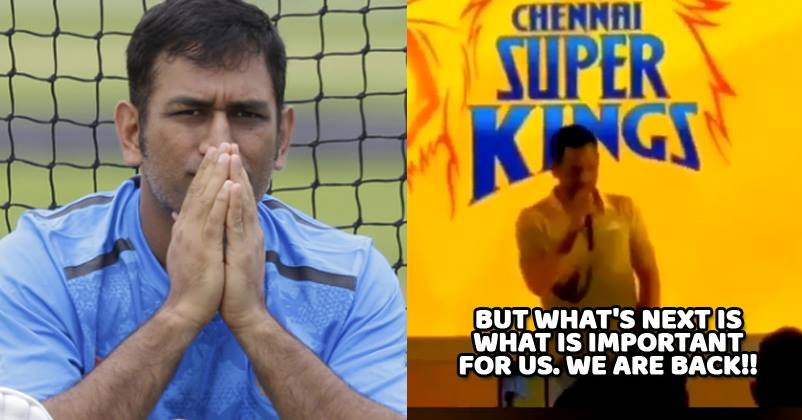 Although Dhoni is termed as “Captain Cool”, he’s not a very emotional person.
However, we have seen his emotional side during Test matches, when he was asked to retire.

Recently too, he faced an overflow of emotions while talking about return of CSK after a huge 2 year ban. While speaking at an event, Dhoni was about to cry, when asked about his feelings about CSK’s return.

No doubt, CSK is a very successful team but it had faced backlash after the spot-fixing controversy. Finally that CSK is back after 2 years, we are waiting for some serious action.

While addressing audience about that, Dhoni almost got choked up and was about to cry.

He also thanked his fans for being supportive throughout. He said,

“As I said it was, I knew I would play for the Pune team but the actual moment comes when you start walking with the team-sheet in your hand till that point of time its only practice and everything. It was a very emotional moment…since I have started playing T20 cricket represented the Indian cricket team, Jharkhand team in few tournaments and CSK for eight years, so it was an emotional moment not to see myself in yellow.”

“But at the same time as professionals, we have to move ahead and also not to prove to anyone but to prove a point to myself that I am making sure whatever I gave in for CSK, I am not leaving any inch that I am not giving for the Pune team.”

As soon as his friend Suresh Raina saw him get emotional, he offered him a drink. We hope Dhoni shows a brilliant performance as always. We wish him all the best.