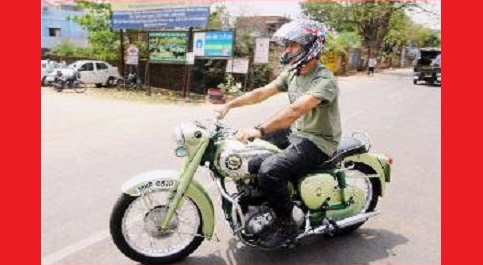 One problem after the other; Dhoni does not seem to have a good time… The captain of Indian cricket team recently had to pay a fine of Rs. 500 on April 7, Tuesday for the reason that he violated traffic regulations. As per Ranchi police, Dhoni was riding vintage bullet BSA Gold Star DBD 34 (MHP-6518) on Monday and sullied Motor Vehicle Act rules on the subject of displaying and using numberplate. In accordance with Kartik, traffic SP, the fine is charged under section122/179 of MVI act. To quote his words, “Dhoni’s family has paid the fine and said he violated the rules due to ignorance.”

MVI Act maintains that the registration no. of a vehicle must be exhibited in the horizontal orientation and the frond as well as rear sides should not have with any obstacle. In the case of Dhoni, registration no. was found to be written vertically attached onto front wheel’s mudguard. Kartik stated, “The photo of the vehicle (published in newspapers) was brought to my notice. It seems that the rules related to display of numberplate have been violated.”

However, traffic SP seemed to lighten this issue by saying, “It is a civil law and not criminal.” Not only this, he also articulated that apt fine for this is of about Rs. 100 and it’d be charged against him.

The skipper had gone to Kolkata with his wife and the baby girl on the occasion of IPL inauguration. Cop is on the verge of sending him notice regarding the fine.