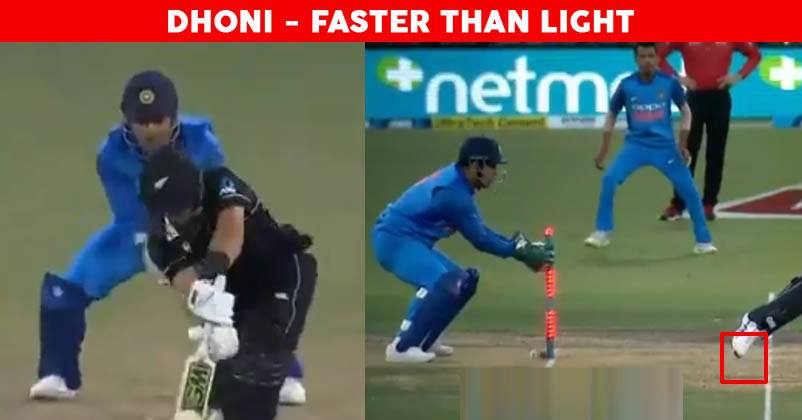 Indian cricketer and former skipper MS Dhoni is undoubtedly one of the best finishers of the game and his wicket-keeping has always been phenomenal. His experience and cricketing skills will be of great help for India in the upcoming World Cup despite the fact that the age is not on his side.

During the second ODI against New Zealand, he once again proved that it will be very difficult for the team management to find a replacement for MS Dhoni.

Ross Taylor was facing the first ball of the 18th over which he missed and the ball went straight in the gloves of Dhoni; however, the senior cricketer saw that the batsman is short of the crease and he removed the bails with a lightning speed. The umpires referred the decision to the third umpire as it was very close to be judged by naked eyes. The decision came in India’s favor and not just the fans but the former cricketers were also left awestruck.

It is difficult to expect such impeccable wicket-keeping from the young cricketers which we are getting to see from Dhoni.

Here is the video of Dhoni’s superb wicket-keeping:

Have a look from another angle:

In the first ODI as well, he told Kuldeep Yadav how to bowl to get Trent Boult out. Kuldeep followed his suggestion and got Trent out in the next ball.

Dhoni is indeed one of the most legendary cricketers India has ever had and we are sure that he will keep on amazing us till he plays in the team!

Virat Kohli And Kevin Pietersen Had A Funny Conversation On Twitter. Fans Will Love It.
BCCI Lifts Ban Off Hardik Pandya And KL Rahul. Netizens Are Not Happy About It.