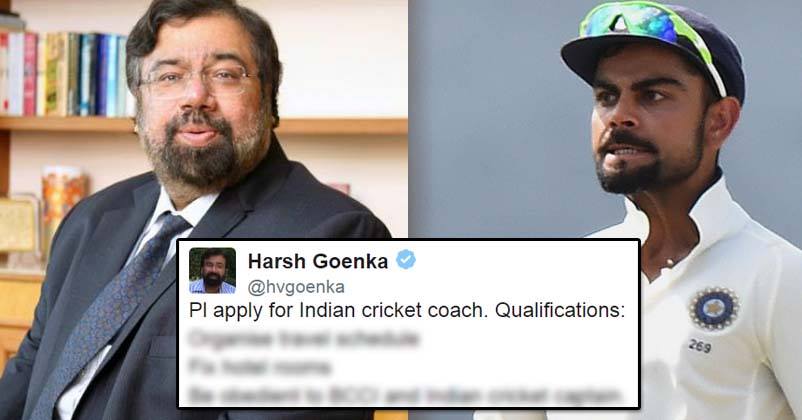 Harsh Goenka, the co-owner of RPS, had made it to the headlines for his not-so-good comments about Dhoni. He had insulted Mahi not once but twice; in return, Goenka got bashed by his fans and was made to realize that he had done a very wrong thing. But Goenka seems to be unstoppable; after Dhoni, he has targeted the Indian Cricket team captain Virat Kohli. We are sure you don’t need any description of the feud between Anil Kumble and Virat Kohli. The issue became really big and Kumble gave up his coach post.

Matters were hyped and media houses blamed Kohli for this resignation. Even cricket fans started slamming Kohli, without knowing what went wrong. Now, BCCI is searching for a new coach and Goenka got a good chance to take a dig at Kohli.

Here’s what he said;

His statement “Be obedient to BCCI and Indian Cricket Captain” is a sly dig at Kohli. Considering the current situation, he feels that the next coach should obey the captain and only then, things will go smooth. This time people supported him instead of trolling him. One of the users replied;

"Qualifications" can be anything. You probably mean "responsibilities"?

To which Goenka replied;

Someone else asked for an application form;

Where can I get the application form Sir ?

To which Goenka again replied;

But then there was one who trolled;

Goenka gave him back!

Things should always be fine between the captain and the coach and this time, Goenka is right. What do you have to say about that? Share your views in our comments section below.