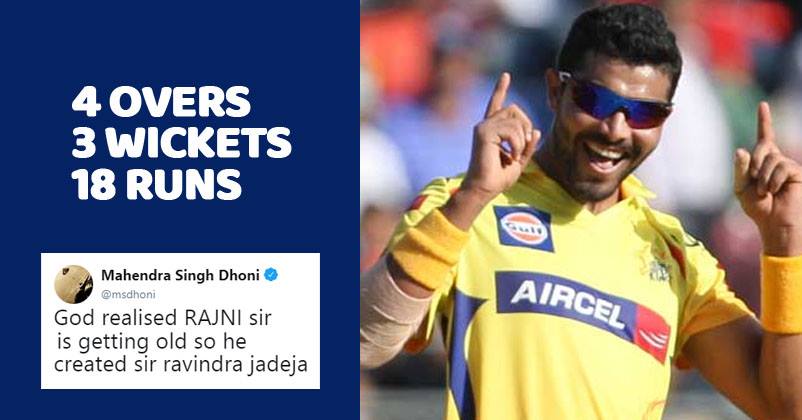 Ravindra Jadeja is trying to give his best performance in CSK but couple of days back, he got trolled for his poor show in the match against KKR.

He dropped 2 catches of Narine and gave away 39 runs. People were trolling him left and right for playing in such a bad way. Some even blamed Jadeja for making CSK lose the match.

Jokes and memes started pouring on social media after that day’s match. Fans were of the opinion that Dhoni wouldn’t spare him in the dressing room.

Meanwhile some fans found an interesting way to troll Jadeja. They dug out old tweets that Dhoni had written for Jadeja and started retweeting them.

In those tweets, Dhoni was seen making fun of Jadeja with lame jokes and PJs. However, the tweets are very interesting ones and you can’t miss them. Dhoni tweeted this after a match in 2013, wherein Jadeja had made CSK win against RCB. 16 balls were needed in the last over; in the last ball, CSK needed 2 runs off 1 ball which was difficult. Jadeja’s catch was taken on the last ball and everyone thought RCB won. However, since last ball was a no-ball, Jadeja helped CSK win the match.

Dhoni posted these 6 tweets because for him it was a miracle.

Sir jadeja once wanted to make a silt mountain to play as a kid now v all call it mt. Everest

Whenever sir jadeja makes an error its an invention and on a daily basis v get plenty of those,all patent pending

In these tweets, Mahi’s wit and humor is clearly visible, isn’t it? Although these tweets are old, they have refreshed memories.

Continue Reading
You may also like...
Related Topics:CSK, Dhoni, rajinikanth