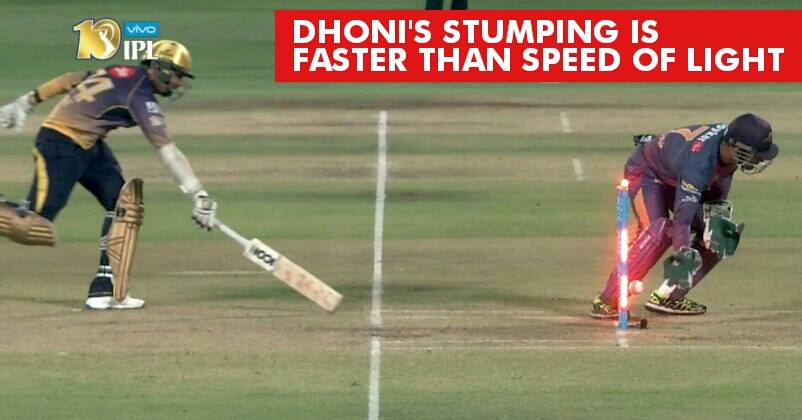 M.S Dhoni is quite popular for his magical stumping; it wouldn’t be wrong to say that his stumping is probably faster than the speed of light. There are several videos on the internet which display Dhoni’s magic behind the wicket.

Today, Dhoni once again treated his fans with a miraculous run out; yes, in the match against KKR, he proved his mettle by dismissing Sunil Narine.

Dhoni used his smartness and was quick enough to send the opening batsman back to the pavilion. Narine isn’t a good runner between wickets and this proved to be a plus point for Dhoni. As he ran towards the other end, Dhoni dived and hit the stumps with the ball, obviously in his exceptional style.

Twitter has erupted with joy after seeing this magic; check out their tweets…

Classic #Dhoni .. Flick onto the wickets and #narine is trolled.. Advice is #ShardulThakur and the combination works. #CaptainCool @SonyMAX

Let's not blame Gambhir or Narine, they're lesser mortals. When Dhoni is keeping wickets, even the greatest of the players piss in pants

Wasn’t even visible to the naked eye!

Street smarts level: MS Dhoni. What a deflection to effect the Narine run out! Wasn't even visible to the naked eye. #MSDhoni #RPSvKKR #IPL

MS Dhoni behind the stumps is a ROBOT ! You can't expect human error! #RPSvKKR #ipl

So guys, wasn’t it impressive? Share your views on the same in our comments section below.

Jet Airways Called Passenger “Bloody Indian”! Bhajji Slammed Them & Complained To Modi!
Ravindra Jadeja Reveals What Made Virat Kohli Laugh So Hard, The Reason Is Not His Beard