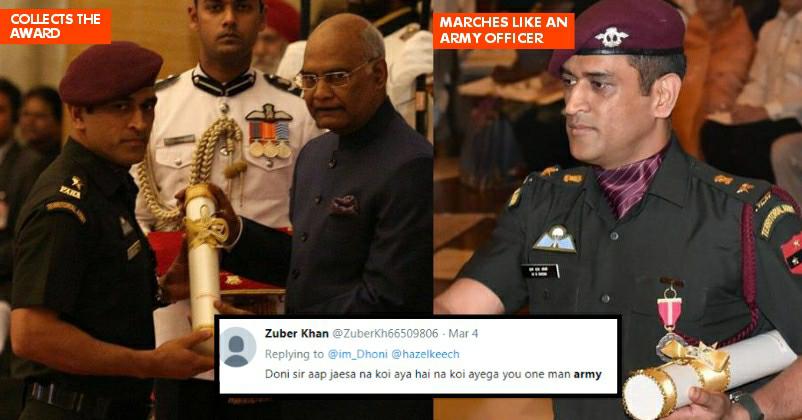 7 years back, India experienced a proud moment, thanks to MS Dhoni. He made us win the 2011 World Cup.

Yesterday, Lt. Colonel Dhoni got Padma Bhushan award by President Ram Nath Kovind. The best thing about yesterday was that Dhoni was dressed up in army uniform.

He marched like an army man for collecting the award & everyone just couldn’t stop applauding. Dhoni’s contribution to cricket has been extraordinary, and this is the reason he was selected for the award.

Dhoni saluted the President & marched all the way to him. Here’s the video;

#PadmaAwards: @msdhoni receives Padma Bhushan on the day India won 2011 World Cup. You wouldn't want to miss this one! pic.twitter.com/cJT7sJetVM

Indians were filled with pride after watching their one-man army. Here’s how they reacted;

Hats off to you!

Dhoni carries the Army uniform really well and with lot of pride. So good to see…..#PadmaBhushan #PadmaAwards #MSDhoni pic.twitter.com/fENZyO60BZ

Even his wife had accompanied him. It was a pleasure to see Dhoni this way.