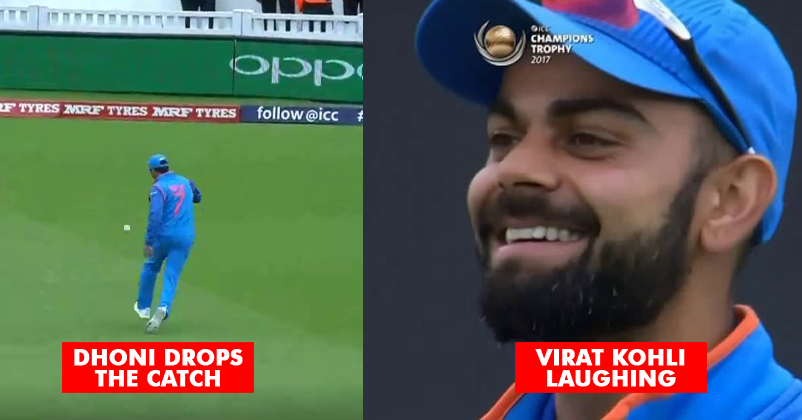 Team India managed to outplay their opposition Bangladesh, in the 2nd warm up play ahead of the Champion’s Trophy. The Men in Blue put up an upfront score of 324 runs and defeated Bangladesh with a huge difference of 240 runs. Surprisingly, mainstream batsman like Virat Kohli, Yuvraj Singh and Mahendra Singh Dhoni were sitting during the first innings and sent the younger players to bat. They wanted the newbies to gain experience and be ready for the main matches of Champion’s Trophy.

Interestingly, Dinesh Karthik was seen with the gloves on field and Indian veteran wicketkeeper MS Dhoni was seen fielding behind, which is a rare sight for us. Things turned awkward for Dhoni in the 24th over of Bangladesh’s innings. Hardik Pandya was bowling and Taskin Ahmed mistimed a shot as the ball went up in the air. MS Dhoni was seen running after the ball but messed it up all when the ball landed on the field safely. Apparently, he had misjudged the ball and found himself in an embarrassing situation. Surprising, Kohli’s reaction was a spectacular sight to see. He couldn’t control himself and laughed out loudly after Dhoni dropped the catch. Dhoni joined him too in his laughing spree, and it all went well and cheerfully and was very entertaining to watch.

To add to the great moment, three balls later Pandya dismissed the last wicket as India acquired the huge win of the day.

Do let us know your thoughts about the video. Hope you liked it. 🙂

Gautam Gambhir Files A Legal Case Against A Resto Bar For Using His Name! Check Out Details
Priyanka Took Selfies At Berlin Holocaust Memorial And People Are Hurt! Once Again They Bashed Her!