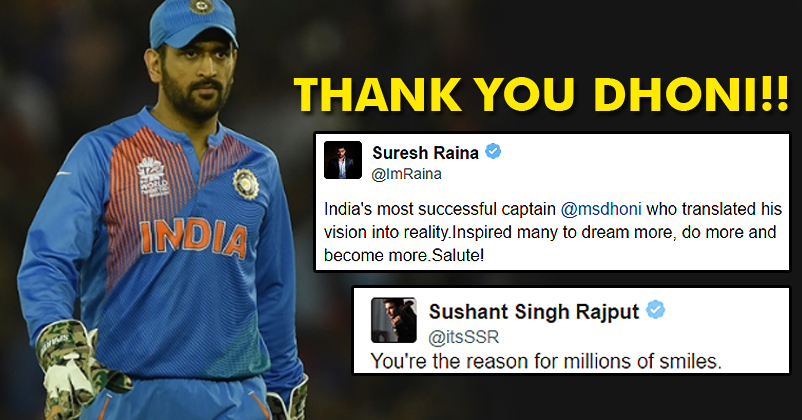 MS Dhoni has left everyone shocked with his resignation as Indian Cricket Captain of ODIs and T-20s yesterday. He was a successful captain in both the formats of the game and had taken the team to the 1st position in Test matches.

Even in 2016, he made the country proud by making the team capable enough for winning T-20 series in Australia as well as Asia Cup. Further, the Indian Cricket team had reached the semifinals in the last T-20 Cup. Due to all these achievements, even a biopic was made on Mahi; it was indeed a great success. This announcement was a big setback for all fans of Dhoni who expected that he will lead India in Champions Trophy.

As soon as this news spread on social media, cricketers took to Twitter and poured their heart out for MS Dhoni.

Take a bow @msdhoni .To lead India for 9 years with such wonderful results, India were really blessed to have you as #Captain .

What a wonderful note!

One by Sushant too!

Any amount of words will be less!

Did you know, @msdhoni is the only man to win all 3 of the ICC Cricket World Cup, ICC World Twenty20, and ICC Champions Trophy as captain! pic.twitter.com/pfRdWH4xfk

Good thing about this decision is that there is still no competition for Dhoni.Would be keen to know who he consulted though! Suspect nobody

Hey @msdhoni yuv been one of the finest leaders of Indian Cricket @BCCI, led the team to great heights & inspired so many across countries! pic.twitter.com/2SQMU8T6CX

India's most successful captain @msdhoni who translated his vision into reality.Inspired many to dream more, do more and become more.Salute! pic.twitter.com/YjWnAgl7VQ

Even one of the greatest captains of all time decides enough is enough … Well done @msdhoni on an incredible leadership term .. #Dhoni

@msdhoni There are no mountains high enough to stop you from climbing.Proud of you !! ❤❤❤❤❤❤❤❤

Thanks for the entertainment

Sign of a true leader is to know when to pass the baton!Thank u for the entertainment skipper u r an #Inspiration @msdhoni #livinglegend pic.twitter.com/H51ChX3yhc

So guys what’s your reaction on this? Do share your views in our comments section below!

Kaif Did A Q&A Session On Twitter & It Was Out Of The World! He’s Super Witty!
Dangal Creates History! It Has Done Something Which No Bollywood Film Has Done