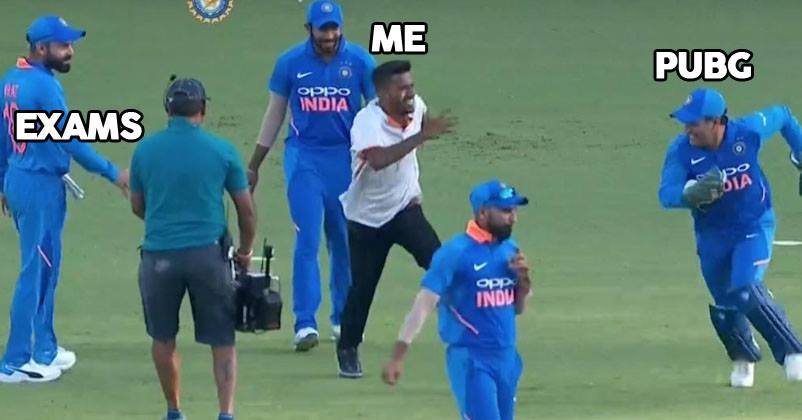 Fans breaching ground security to meet their favourite cricketer MS Dhoni is not a new thing but what happened in Nagpur yesterday has left everyone in splits. Undoubtedly, Dhoni is one of the most loved cricketers of the world and he must have become habitual of such incidents in which fans come to him to hug him or take his blessings by touching feet. Well, we are saying so because these types of incidents have taken place quite a good number of times now.

Yesterday also in Nagpur when the Indian team was entering the ground just before the start of Australian innings, a fan came running towards Dhoni. When the former skipper saw the fan coming towards him, he first tried to hide behind Rohit Sharma and then started running away from the fan.

However, the wicketkeeper-batsman stopped when he reached the pitch and hugged the fan who was escorted out of the ground by the security staff.

This incident left many amused and fans praised Dhoni for his sense of humour while some of them started creating hilarious memes and jokes based on this incident. Here are some of the selected ones:

Damn! this is so related to me…

Me when my realtives comes to meet at my home. pic.twitter.com/cEzXiCA9al

When Someone Says..Its Retirement time For Dhoni !!😶🐸

Yesterday’s ODI between India and Australia was won by the Indian team, thanks to the century scored by skipper Virat Kohli.

Fan Tried To Hug Dhoni But Dhoni Started Running. This Video Will Leave You In Splits
Mumbai Indians Asked What People Thought When They Saw Yuvi, Stuart Broad Had The Best Response Ever.