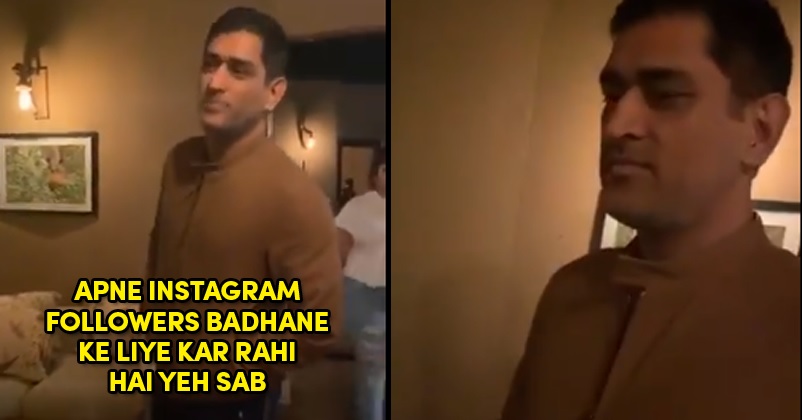 Dhoni is one of those cricketers who are not much active on social media but his wife Sakshi Dhoni is quite active on Instagram and she often posts videos featuring her, husband Dhoni and their daughter.

If you remember, recently Sakshi posted a couple of videos in which she was teasing her husband by calling him “sweetie”, “baby”, etc. but this time it was Dhoni who trolled his wife by saying that she is making videos in order to increase her Instagram followers.

When Dhoni took a dig at Sakshi, she responded by asking Dhoni, “Your followers will also love me no? ….because I am part of you.” She also said that Dhoni’s fans want to see more of him and then addressed Dhoni as Thala as well while Dhoni got busy in some other work.

Nowadays, the former skipper is making good use of his time as he is on vacations with his family in Madhya Pradesh at the Kanha Tiger Reserve and as per the sources, he will be there till 31st January, 2020. This video was made when Dhoni and his family returned from Kanha Tiger Reserve, Mandla, after enjoying the jungle safari.

Such cute interactions between Dhoni and his wife are no less than visual treats for Thala’s fans! Agree?

Indian cricketer MS Dhoni may be out of the Indian team for a long time now but there is no denying the fact that there is no decrease in his popularity among his fans. While a lot is being said and talked about his retirement, the cricketer has chosen to remain mum on this matter. However, the head coach of team India, Ravi Shastri recently said that Dhoni’s future in the Indian cricket will depend a lot on his performance in IPL 2020.

While Dhoni will be leading the Chennai Super Kings (CSK) once again in IPL 2020, the owner of the franchise has confirmed that Dhoni will be a part of the team in IPL 2021 as well.