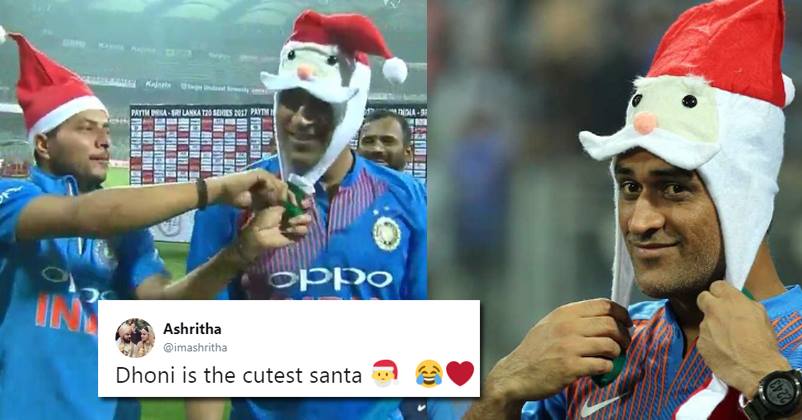 After winning the One Day International series, Indian cricket team has now won the T20i series as well by defeating Sri Lanka by 3-0. The third and the last T20i of the series was played at Mumbai and despite a low target of 136 runs, the Indian team still lost five wickets in achieving the target.

Once again the winning shot was played by one of the best finishers of the world, i.e., MS Dhoni. There is no doubt that the wicketkeeper-batsman may have left the captaincy but he still plays a very important part for team India. When Dhoni came on the field to bat, India needed 28 runs of 23 balls and the visitors were trying hard to win the final match which would have ended the series on a good note for them. However, with Dinesh Karthik, MSD made sure that nothing went wrong and India won the match by 5 wickets.

After the match, the Indian players donned Santa caps and cheered for the audiences and wished them Merry Christmas with this beautiful gesture but Dhoni wore a little different cap and gave some really cool expressions. 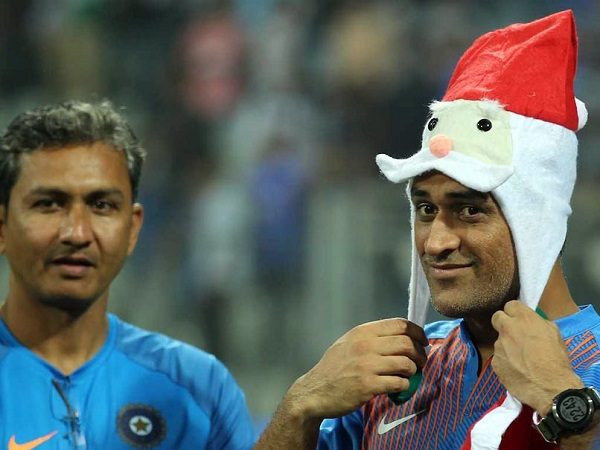 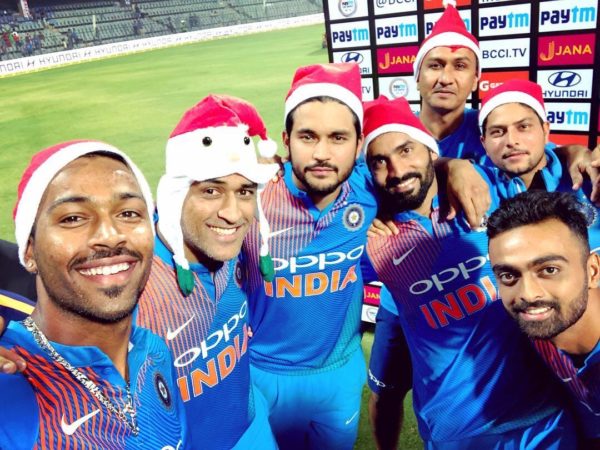 You have always been my Santa:

#MerryChristmas Mahiii @msdhoni u r always a Santa of mine🎅🎅🎅🎅 Thank you for all good memories that u've given to us.. tons of love for u😘😘😘😘😘😘stay blessed nd keep rocking forever #Dhoni #Thala #legend 😎 pic.twitter.com/6lXI0yW1ni

Coolest Santa of this season:

Keep Calm Because we have the Coolest Santa this Season! 😇😘#MerryChristmas #Dhoni pic.twitter.com/gBT30DHodI

He is the real Santa:

One and only MS Dhoni:

Dhoni is the cutest santa 🎅 😂❤

Ziva would be on cloud nine:

This is too much for my poor heart to take😭❤ Ziva would be so happy seeing you as a santa @msdhoni 🎅🎄 pic.twitter.com/5Ww4znnjpH

Dhoni at his best:

#Dhoni at his best! And also the cutest with that santa cap!

His smile is the best gift ever!

Wowwwwwww zo cute😍😍😍
My Santa is here…Nd my Santa gave me special gift … that Winning shot…Nd his smile my Best gift …Thanks My Santa MAHiya 🎁🌲
Merry Christmas Santa @msdhoni 🌲🎁🎉🍫🍫👏👏👏 pic.twitter.com/AMyHjlFfgR

How did you find Dhoni’s look as Santa? Let us know.

3rd Day Collections Of Tiger Zinda Hai Are Out. Numbers Are Amazing
This Is The Best Nomination Task. Contestants Have To Track 42 Minutes & Hina Will Play Evil