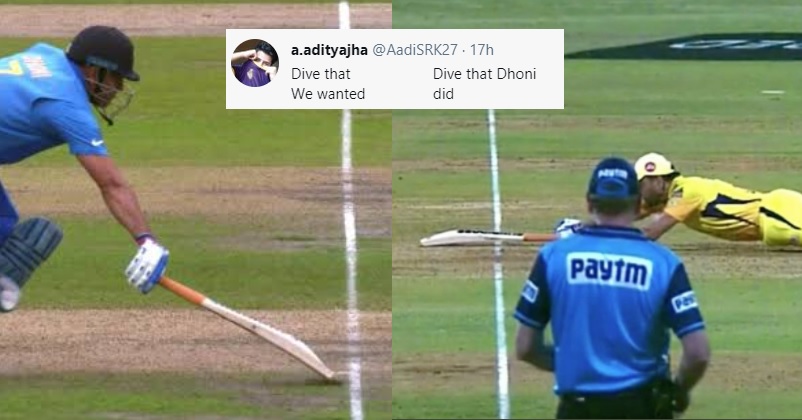 The former Indian cricketer MS Dhoni took retirement from the international cricket last year but the good thing is that we are still seeing him playing for Chennai Super Kings in the IPL 2021. The last international match that Dhoni played for India was the semi-final of the 2019 ICC World Cup in which India got defeated by New Zealand. In that match, Dhoni got run out and everyone was quite surprised to see that Mahi who is a great athlete didn’t try to save his wicket by making a dive.

However, the sad memories of the 2019 World Cup semi-final got refreshed once again in the IPL match which was played recently between CSK and Rajasthan Royals (RR). In the 15th over of the CSK innings which was bowled by Rahul Tewatia, Dhoni pushed the ball to the cover region but Ravindra Jadeja refused from running because of which Dhoni had to run back to the striker’s end and for saving his wicket, he had to stretch his body and make a dive. 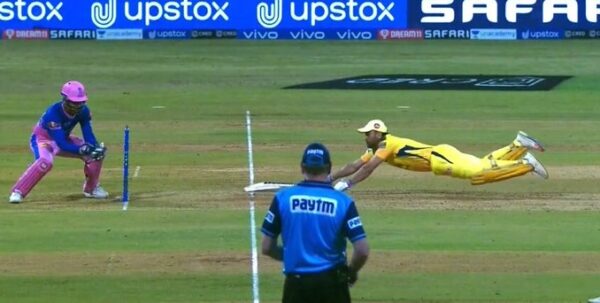 Here is the photo in which you can see Dhoni making a full length dive and saving his wicket.

However, soon the haters of Mahi started comparing his efforts of the recent match with the efforts that he made in the 2019 ICC World Cup semi-final against New Zealand which India lost by 18 runs. Here are some reactions by the trollers:

Never did this dive for india

Such desperation, he just jumped off…lol.. couldn't even dive properly..Had he shown that desperation on 10th Jul 2019.!

MS Dhoni had an illustrious career at the international level and he is the only skipper who has won all the three ICC trophies including the T20 World Cup in 2007 and the ODI World Cup in 2011. As far as the IPL is concerned, MS Dhoni has been leading CSK since the inaugural edition of 2008 and he is the second most successful skipper of the IPL as CSK has won the league three times under his leadership.

The wicketkeeper batsman who is also called Captain Cool by his fans has a huge fan base. His followers were not able to see their favourite player getting targeted by the trollers and they decided to give it back to the haters in a perfect manner.

Here is the response by Dhoni fans:

Those who are mocking dhoni for his dive they never learned from their mistakes it seems that's why they are still struggling in life and trolling him unnecessarily#CSKvsRR #MSDhoni pic.twitter.com/rOhlCY5xS9

"NO ONE IS MORE COMMITTED TO INDIAN CRICKET THAN MS DHONI" ~Virat Kohli pic.twitter.com/3LjWifJF72

What is your take on this matter? Do let us know your views.