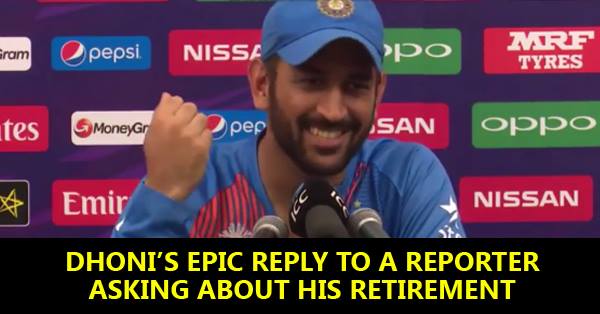 India’s journey in the World T20 2016 halted with the seven wicket defeat in the Semi-finals against West Indies and the dream of winning the World T20 came to an end in a painful manner.

Once again, the focus will be on the Indian skipper MS Dhoni who has been the target of media for quite some time now and reporters are repeatedly asking him about his retirement. One reporter from a foreign media house asked Dhoni whether he would keep playing after this tournament and the manner in which Dhoni replied is just awesome.

He called the reporter on the podium and asked him to sit beside him. Dhoni then asked him some questions regarding his fitness and career and made him answer the question himself which was asked by the reporter only.

Watch The Kickass Reply Of Dhoni To The Reporter Who Asked Him About Retirement After India Lost Semi-Final:

Do share your views about Dhoni’s reply in the comments section below.

This News Of Anushka-Virat Has Made Fans Sad Forever!
KRK’s Abusive Tweets After India’s Loss To West Indies Are Must Read