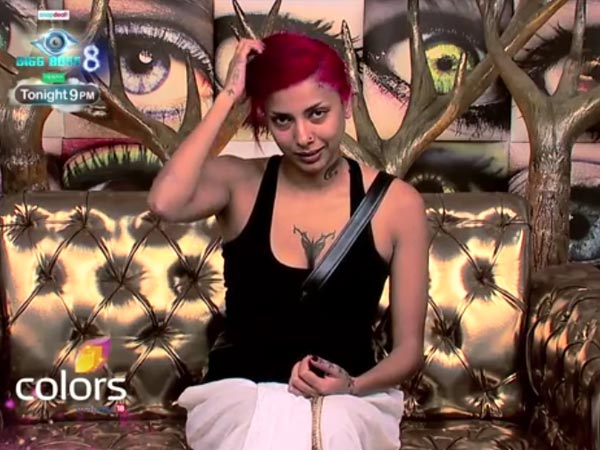 Another big news from Bigg Boss 8. This season is surely turning out to be one of the most controversial season of Bigg Boss. The big news today is not about any eviction. Its about Diandra being Pregnant.
Yes, Diandra Soares who has been in the house of Bigg Boss for about 2 months is now pregnant. Recently Diandra was seen being in a close relationship with another Bigg Boss participant Gautam Gulati. Both of them were also seen locking themselves in the bathroom a few time.It reminds me of the song “Hum tum ek bathroom mein band ho aur chaabhi kho jaaye, socho kabhi aisa ho toh kya ho :P”, now you guys can guess what can happen in that case. Yeah bingoo, baby can happen in that case ;). Diandra taking Gautam to loo in hurry. They can’t even control their excitement:-

According to a  close source, Diandra complained about her uneasiness to the Bigg Boss. After her complain, she was soon taken to a nearby hospital for checkup.
After the checkup it was revealed that Diandra is Pregnant. This news could just be rumour and she could have taken to hospital for another medical emergency. Whatever could be the reason, we need to wait for tonight’s episode to figure out what exactly happened with Diandra.

Sources said – After the news of Diandra being pregnant was out, Salman Khan was very angry with news. He even threatened to leave the show.

Salman said that this is a family show and this kind of incidents seriously put a question mark on the actor’s credibility. He even said them that he don’t want to be the part of this show anymore.

But after some discussion with the makers, Salman finally decided to stay, but asked them to remove Diandra immediately from the house.The producers accepted it and Diandra was removed from the house. Upen Patel was going to leave the house this week (We posted 2 days before). But now the creative team has changed their minds and has decided to throw Diandra out instead.

So, what are your views about this incident?? Should these kind of activities be tolerated in the house of Bigg Boss?? Should Bigg Boss also punish Gautam Gulati??

PS:- Currently there is no confirmation about her pregnancy and this article is written based on rumors spread in social media from past 2 days. We will be waiting for tonight’s episode to figure out what exactly is the reason of Diandra leaving Bigg boss house. Is it because of pregnancy or some other medical emergency.