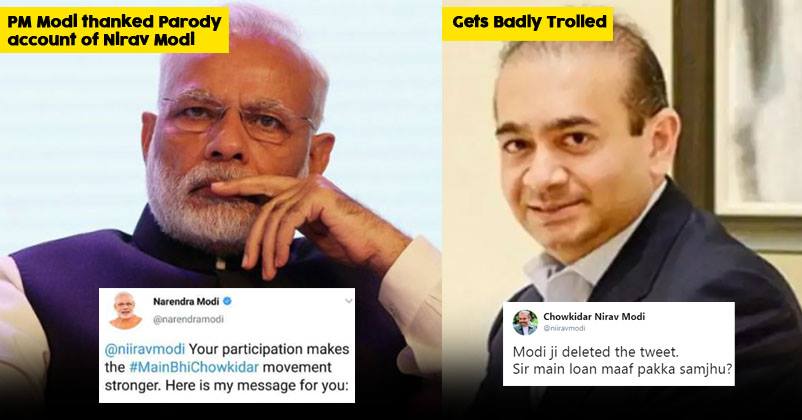 On Saturday, Prime Minister Narendra Modi launched a new campaign online with the hashtag #MainBhiChowkidar which essentially means that every Indian should fight the battle against corruption and the various social evils persisting in society.

Modi’s campaign is expected to be a jibe against Congress since Rahul Gandhi often emphasizes that “Chowkidar chor hai” and the campaign is supposed to draw in followers before the elections.

In order to further the campaign, anyone who tweeted using the aforementioned hashtag, received an automated tweet thanking him or her for supporting the movement.

However, this took a hilarious turn when an automated tweet went out from Narendra Modi’s official handle, thanking the fugitive diamond merchant Nirav Modi.

Turns out, it was a parody account of Nirav Modi, the business tycoon who is currently in London and wanted in India for the Punjab National Bank scam. 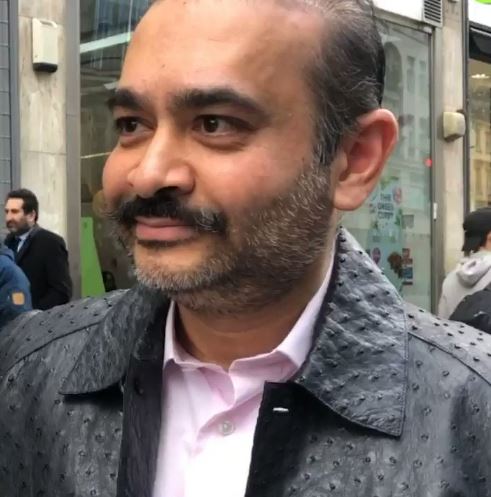 This is a screenshot of the automated “thank you” message that went out from Narendra Modi’s official account to Nirav Modi’s parody account: 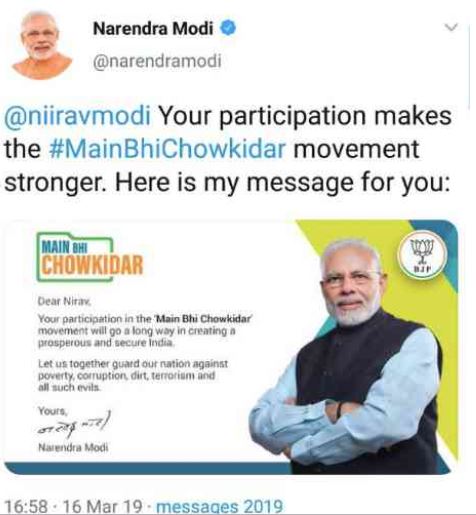 Dear @narendramodi Ji,
I am feeling shattered today – i can understand that u tweeted out to @niiravmodi – because old friendships mean something to you.#Respect
But why on earth would you tweet to @dhruv_rathee?? He exposes you daily and we troll him hourly!
.#BhaktBanerjee pic.twitter.com/jGgE4uWg9o

This is hilarious. Would you like to add to this?

This UP Guy Calls Police To Give Him Lift Because He Has No Money For Bus. Watch Video
Haryana Maths Professor Becomes “Love Guru” And Gets Suspended, Video Goes Viral