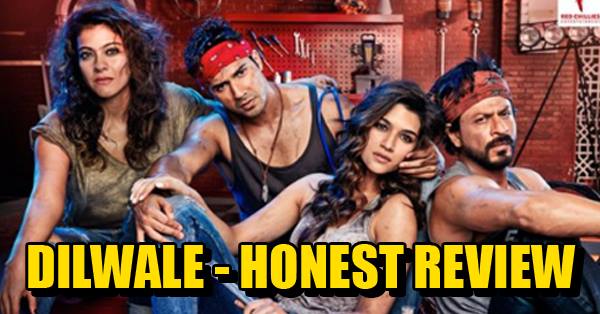 Rohit Shetty’s Dilwale is all about mind-blowing star-cast, expensive cars, beautiful locations, romance of two generations, light comedy and mafias. So in total everything that is needed for a Masala Bollywood movie is mashed up and served on the platter of audience. The story resembles the films of 90s in which the rivalry of two mafias comes to an end when their children fall in love; however, Rohit Shetty has added some twists and turns which add the element of suspense and make Dilwale intriguing to some extent.

The movie starts in Goa showing the camaraderie of two brothers who although are not real ones but their relation is stronger than the real bros. We are talking about Shah Rukh and Varun; SRK no doubt being the elder, whereas Varun is not aware of SRK’s being his step-brother. Then we are taken into flashback and the movie starts unfolding the past of SRK in Bulgaria and at that place, we get the very first glimpse of the gorgeous diva Kajol.

It’s creditable on the part of the actress that even after making a comeback in Hindi Cinema after a long time, she looks just awesome, even more beautiful than ever and it never seems from her natural acting that she had a long time break from the industry. Varun Dhawan succeeds in entertaining public as always; in fact, when he is on the screen, there’s a smile on people’s face almost every time, while Kriti looks average but has done a nice job. And SRK is as brilliant as always; nonetheless, Rohit seems to have done injustice with the role of Boman Irani since his character in the movie is not as powerful as his acting capability. Johnny Lever, Varun Sharma and Sanjai Mishra, all the three combine gave Dilwale a good flavor of comedy.

However, the plot of the movie is not as strong as the star-cast. It’s little scattered and could have been better. The director wanted to make people laugh in bits and pieces by including scenes which have no relation to the movie. There are a couple of songs which fail to entice audience whereas the music is average. However, Gerua song indeed has a magical effect owing to scintillating locations.

Why To Watch: If you want to relive the unbeatable chemistry of Shah Rukh Khan and Kajol.

Why Not To Watch: If you are looking to watch a sensible and logical movie.

PS: The notable thing is that Rohit Shetty has used cars for modifying more than blowing them up in the air.

Do share your views about the movie when you watch it in the comments section below.

Check Out What Were The Most Searched Things On Google In 2015
The Number Of Hate Msgs For SRK, Shows The #Intolerant Side Of People