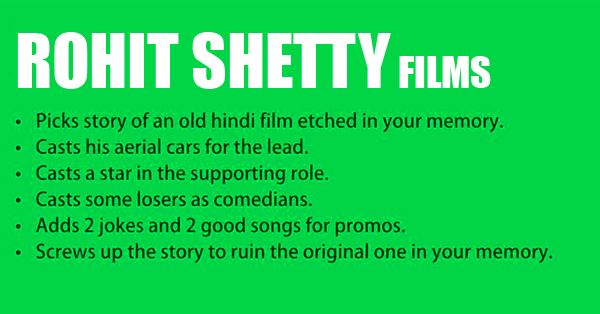 It was once quoted,

To make a great film, you need three things – The Script, The Script and The Script

However, in the present scenario, every director has his or her own recipe of making movies. Every time, they want to the movie to be different from the previous one, a bigger hit than the previous one. Sometimes, the movie revolves around a particular phase of life cycle and sometimes it is around a particular emotion a person is carrying along. Every director tries his best to bring his vision into a movie which the viewers can connect with.

During this journey of directors, there comes a phase, when the viewership of their movies starts dipping, even when they are the biggest & some of the most successful directors of the industry. They have numerous hits in their kitty, still there is something the audience is not liking.

One of the reason is the repeated patterns / recipe of making the film, every director follows. Keeping this in mind, the Students Of Cinema have successfully pulled out a pun on some of the top Directors of Bollywood. Very creatively, they have made the most hilarious posters on their styles of the film making. Continue Reading
You may also like...
Related Topics:Directors, Film Templates

EXCLUSIVE: New Wild Card Entry In Bigg Boss 9 Is This Sexy Bollywood Diva
Remember This Child Actor From ‘Koi Mil Gaya’? This Is How He Looks Now & What He Is Doing These Days