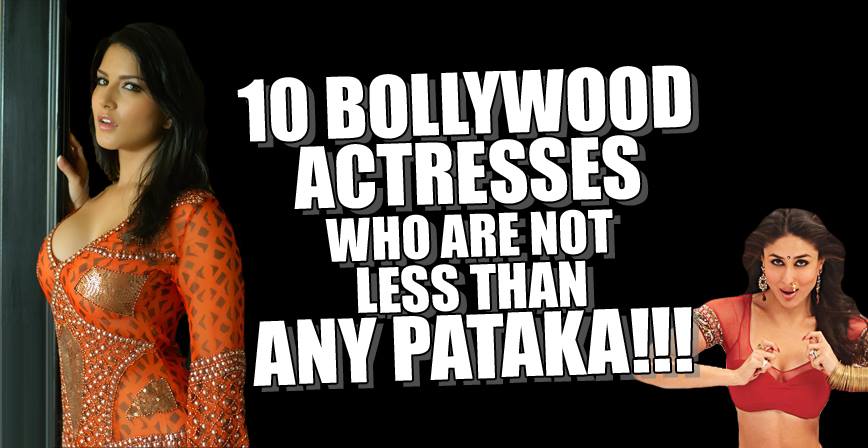 Our Bollywood Industry has a lot of cute and pataka actresses. They are not just known for their talent and acting skills but also for their beauty and hot figure. Today as a Diwali Special we are presenting top 10 Patakhas of our Bollywood industry

Deepika Padukone is an Indian film actress and model. She has established a successful career in Bollywood films. With her beauty and charming personality, she is at the 1st Number of our top list of Bollywood Patakhas. Katrina Kaif is a British Indian film actress and model. Katrina Kaif is one of eight siblings, all girls, from a mother who is a Caucasian of British Nationality. She has won the hearts of so many people with her grace and hot looks. Priyanka Chopra is an Indian film actress and singer, and the winner of the Miss World pageant of 2000. She has a bold personality with a little sense of humour. She has also got the perfect figure and therefore she comes 3rd in the list. Kareena Kapoor Khan is one of the best actresses of Bollywood. She can carry any outfit or attire with equal grace, be it a traditional outfit or a modern westernized dress. Aishwarya Rai Bachchan, the queen of Bollywood and an extremely beautiful woman in the world, has had been a wonderful actress. It seems that Aishwarya has disappeared from the movies since the time she gave birth to a girl baby. But Still she is the gorgeous lady of our Bollywood Industry. Sonaskhi Sinha ,daughter of Shatrughan Sinha, was lucky to have a chance to appear in her debut Dabangg with Salman Khan, which was a blockbuster movie. After that the graph of her popularity kept on increasing and she is now considered one of the famous Bollywood females. Anushka Sharma is an Indian film actress, producer and former model. In 2008, she was signed by Aditya Chopra for a three-film contract with Yash Raj Films. She is a real beauty with charming and hot looks. Young and bubbly actress Shraddha Kapoor is a newbie in the Bollywood industry. She has great assests including her sweet voice. She created a new sensation in the Bollywood with her charm and cuteness. Jacqueline Fernandez is a Bollywood actress, former model, and the winner of the Miss Sri Lanka Universe pageant of 2006. She really has great looks and her dressing sense is also awesome. She is sexy and hot too. Karenjit Kaur Vohra better known by her stage name Sunny Leone is an Indo-Canadian and American actress, businesswoman, model and former american actress. Apart from her profession, she is hot and kind of cute girl. So which one is your’s favourite Patakha..? Comment and let us know too!!!