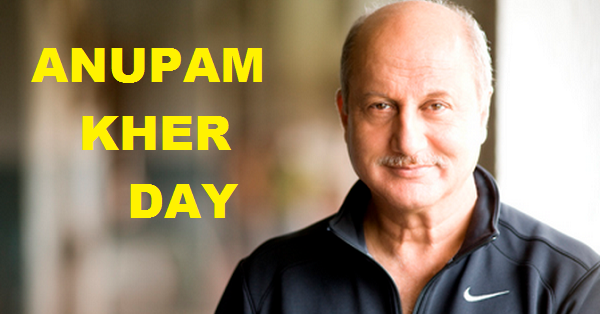 When talking of the versatile and talented actors of India and especially Bollywood, Anupam Kher is one name which must be included in the list. He glitters on the silver screen plus when it comes to be a theatrician, he is simply mind-blowing and unsurpassed. At the same time, he is matchless in just any and every character in all the movies, be it A Wednesday, Baby and so on. And what could be greater than this fact that veteran actor has proved himself not only in Hindi Cinema but also his glory spreads internationally. Impressed by her versatile personality and incredible skills, Las Vegas has declared September 10 as Anupam Kher Day.

Anupam Kher is taking a tour to USA in connection with “Mera Woh Matlab Nahi Tha”, his play which got very good response. Additionally, the actor had been honored with ‘Certificate of Excellence’ in the city on Thursday by Senator Kihuen.

Admiring the actor, Senator Ruben Kihuen stated, “Thank you for bringing such an extraordinary performance to Las Vegas and various other cities around USA. It has been an honor to meet and watch the cinematic genius live on stage.” It was natural for the actor to be excited after such an honor and this is what he told PTI, “It is said that what happens in Vegas stays in Vegas, but this honor by the State of Nevada will not stay only in Vegas but will travel to the world and to my beloved country and prove my philosophy of life mein kuch bhi ho sakta hai.”

Hats Off To Anupan Kher who represent our country globally and bring international fame, adding to the pride of India!

RVCJ Team Congratulates You For This Honor & Appreciation, Mr. Kher!

You Are An Inspiration For Many…