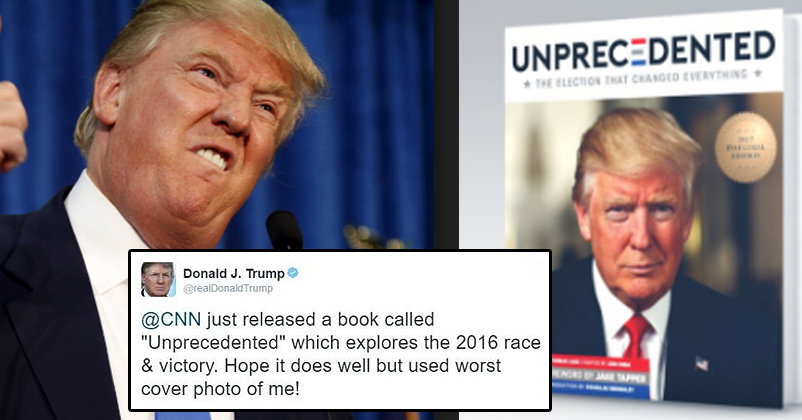 CNN writer Thomas Lake wrote a book called “Unprecedented” which explored every detail of the presidential elections of U.S.A. It contains all the details of every event that happened during the elections.

Get the 2017 inaugural edition of CNN's book "Unprecedented" in stores or online https://t.co/mc3RFkFF3O #unprecedented pic.twitter.com/hw3vZ1ge8V Donald Trump is an interesting kind of personality. He complains almost about everything, This is not the first time when he took up an issue like this on Twitter. He always have issues with everything going around him. This time he complained about the cover photo that was published on the Book. He tweeted about this and got trolled badly.

According to official website of CNN, The book “Unprecedented” contains every aspect of the fight between Donald Trump and Hillary Clinton. It shows the journey of a billionaire and a reality TV star. It shows how two people with no military or government experiences fought presidential elections.

The funny part about this whole incident was that Trump didn’t criticise the content of the book. Instead, he had issues with photo of him which was used as cover for the book.

After the tweet of Donald trump and his “Worst Photo” remarks. Twitterati trolled him badly by tweeting some of the other options for worst photo.

Let’s have a look at some of the hilarious Tweets.

Did they use this one?

did they use this one? pic.twitter.com/1ezRJuxPqv

How about this one?

how about this one? pic.twitter.com/HzWBHN6YlV

This one is pretty nice too!

this one is pretty nice too! pic.twitter.com/2pEAdg6jFv

Aww, I don't think it's *that* bad, @realDonaldTrump @CNN. It really captures your good side! pic.twitter.com/ASbtFNimrL

He's called all of these 'worst'. Maybe it's the subject? pic.twitter.com/0tHHqdgytX

This one’s awesome too…

We here at MDT kinda like this one. pic.twitter.com/4bzmx1gDRn

10 Excuses To Tell Your Boss When You Are Late To Work! You’ll Be Saved!
10 Unknown Facts About Guru Gobind Singh Ji: The King Of Humanity!