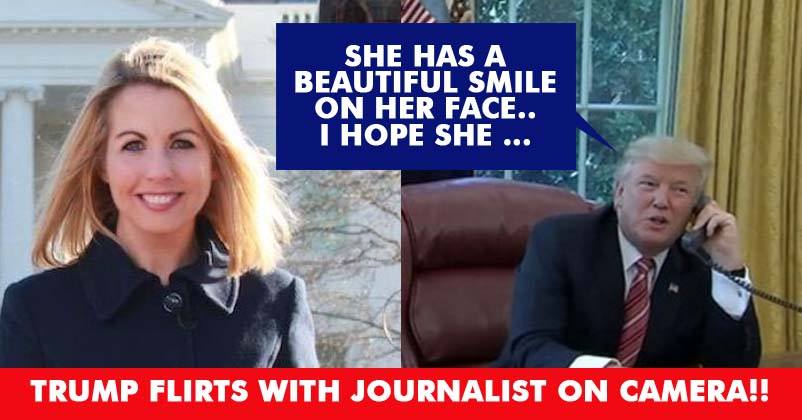 The US president Donald Trump has his own record of not being a very likeable person. There’s hardly a day when we don’t have in the news and most of the times he’s discussed for wrong reasons. Even when he goes to do good, there’s always something that reverses the effect.

Recently, he called Ireland’s new Prime Minister, Leo Varadkar, to congratulate him. A small group of journalists were also present to cover the important conversation in which Trump and India-born, first gay leader, Leo discussed the matters such as migration and Britain’s exit from the European Union.

As they were talking, Trump took a break and complimented an Irish journalist for her beautiful smile. The conversation, however, looked a bit flirtatious on Trump’s side and the journalist ended it with a smile. Later she posted the video on her Twitter handle and called termed the moment bizarre. Have a look-

Video of the bizarre moment when President @realDonaldTrump called me over during his call with Taoiseach @campaignforLeo Varadkar. @rtenews pic.twitter.com/TMl2SFQaji

Video of the bizarre moment when President @realDonaldTrump called me over during his call with Taoiseach @campaignforLeo Varadkar. @rtenews

In case you didn’t understand the conversation, here’s what happened-

“Well, we have a lot of your Irish press watching us,”

“And where are you from?”

We have all this Irish, beautiful press present here.”

*Caitriona comes ahead and introduces herself* and Donald tells Varadkar*

“She has a nice smile on her face so I bet she treats you well.”

Caitriona’s tweet went viral and received huge response from Americans. While some apologized for Trump’s behaviour, others criticised her for blaming Trump. Check out –

It's hell to be objectified. When POTUS has no fear of doing that surrounded by cameras… I'm so sorry. Your success is more than a smile.

He called you over to look you over. Gross. #EmbarassedForMyCountry

We apologize that our president is a weird, inappropriate creep.

His wife defends him.She should be forced to be around him at all times. The other females have real work to do. Hope Colbert caught that.

you handled this so well! so sorry you had to.

So any man that says you're beautiful&you have a nice smile is a creep?I normally take that as a compliment.I see your minds in the gutter.

What do you think about this? Was he really flirting or it was just a simple compliment?