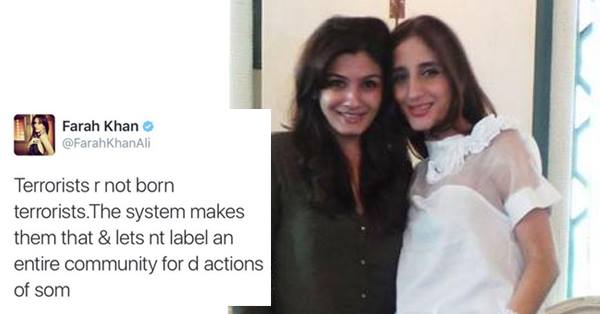 Thanks to the statements of Aamir Khan and Shah Rukh Khan on increasing despondency and intolerance due to which they received so much hatred. Now, Bollywood actors have stopped passing statements on political and sensitive issues. They give preference to being politically correct and sensitive these days. However, 2 actresses from B-town don’t mind indulging in a Twitter cat fight over sensitive issues like communalism and terrorism. Usually, actresses chat about fashion, lifestyle and food in general or bitch about other actresses. However, now Farah Khan Ali and Raveena Tandon had a chat fight over terrorism issues. You would be amused to see how the tweets were misinterpreted and misread and how communalism came into the scene.

See how this all started

One more reply from Raveena

@FarahKhanAli like wise easy to twist words-I didnt mention any community- but you did. I was speaking in general about global terrorism

@FarahKhanAli here is what I said and that is what you replied,where pray tell have I mentioned any community. pic.twitter.com/vGKUNGwBVW

And the cat fight continues

@FarahKhanAli Coz your tweets suggest so. What does "blaming the system" for terrorists mean? Sympathy That's a defence for terrorists.

@TandonRaveena what are you trying to prove love? You're nationality, your patriotism? Because I consider myself a very proud Indian.

@FarahKhanAli truly said.Nobody is labelling anyone?Where in any of my tweet have i labelled you or anyone? Uve misunderstood d whole thing

Let us end it with a phone call

They both have been good friends and now, before this fight took an ugly shape, they decided ending it. However, their tweets were pretty interesting.

Continue Reading
You may also like...
Related Topics:Don't Miss Out The Twitter Cat Fight Of These 2 Actresses! You Would Find It Truly Amusing!, Raveena Tandon Farah Khan

10 Perks Of Having A Punjabi Mom
Sanjay Dutt Became Super Emotional When This Actor Tightly Hugged Him After Release!