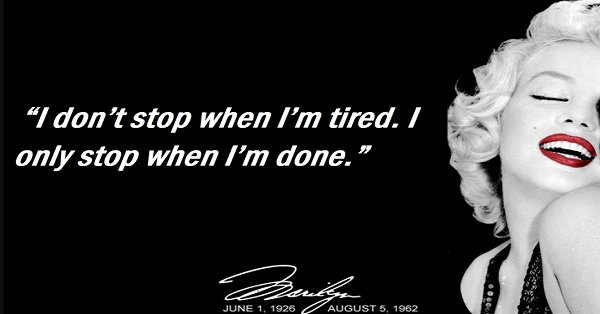 “Diamonds Are A Girl’s Best Friend.” Born as Norma Jeane Mortenson on June 1, 1926 in Los Angeles, Marilyn Monroe was an American actress, model, and singer. She was not only a popular celebrity, she was quite a strong personality who struggled and achieved remarkable success in her life. The most celebrated actress never knew who her father was and her mother left her at the age of 2. She was raped at 6, worked as a kitchen worker at the age of 9 and married a man she called “Daddy” at the age of 16. She died having become a million dollar movie star in 1962 and after that New York news created history by registering highest number of suicide rates by her fan in her love. Have a look at few influencing quotes by the strongest lady who fought and find her way to success on her on rules- Inspiring? Don’t forget to leave your response in the comment section below.