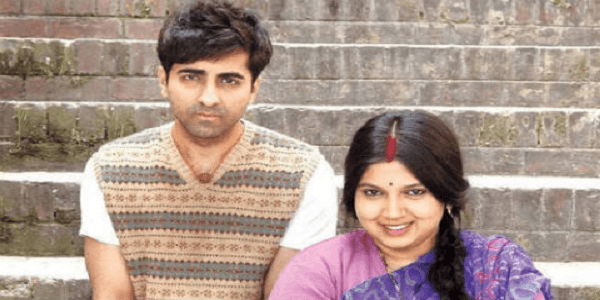 Apart from the simple yet extraordinary script of the film, Dum Laga Ke Haisha, that binds the audience from the beginning to the end, is its straight from the heart to connect the lives we see around us. The girl and boy next door image of the characters that are presented in the film can sway your heart with the essence of the bygone era; the lost nostalgia that actually people long for. The present day is critical; the film you can say is few drops of simplicity in the vast ocean of complexity as the relationship it has portrayed is fresh, overflows with life and most importantly, the characters in the film are beautifully crafted and the story has its own unique that melts your heart away.
With no fake backdrop, over the top music and dance sequences and pinching climaxes- the film is going to fetch a 4 out of 5 for sure.
The main characters of the film- Prem and his overweight wife Sandhya played by Ayushman Khurana and Bhumi Pednekar respectively along with other supporting characters of the film played by Sanjay Mishra as Sandhya’s father who is extremely genuine and Seema Pahwa as her mother is outstanding and just perfect a bride’s mom. They truly bring the natural flavours of the real love and life stories.
The story revolves around a Haridwar bred middle class guy who has to give up his studies and work to run his father’s recording shop. He was forced to married an overweight girl Sandhya( Bhumi Pednekar). Inspite of being married to a guy who is a mamma’s boy and is even not as half educated as her, she tried to make their married life successful by overlooking all the flaws in her husband.
Overall, the story of a misfit marriage, their growing love in spite all the dissimilarities is a story worth believing and watching.

Reasons Why MS Dhoni Is Simply The Best Indian Cricket Captain Ever
Autographs of 44 Famous Indian Personalities You May Have Never Seen Before!!!