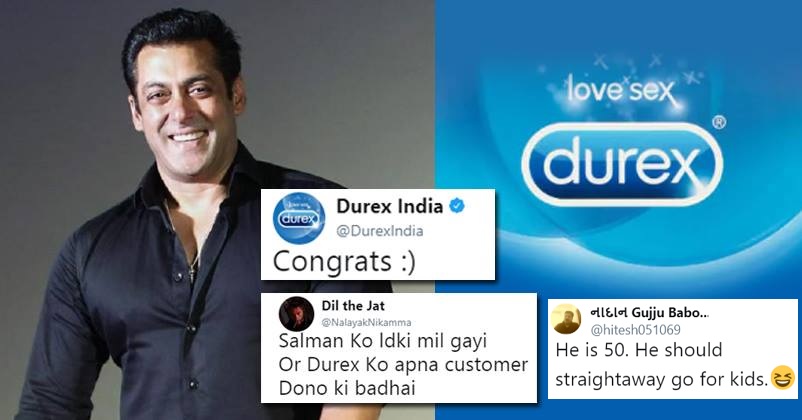 Salman Khan is definitely on cloud nine after the smashing success of “Tiger Zinda Hai” but at present, he is getting trolled for a tweet made by him.

Twitter went crazy as superstar Salman Khan tweeted, “Mujhe ladki mil gayi”. This tweet indicates that he has found the girl; however, he hasn’t made it clear whether it is for his upcoming movie or any other project. But Twitter didn’t take time in seeing this tweet in connection to his marriage which is almost a national topic for debate now.

The micro-blogging site got flooded with messages in response to Salman’s tweet and while some were saying that it must be about a film, others were making fun of his private part and asking whether his tiger is still alive or not.

Tweet of Durex India further gave ample fodder to Twitterati to troll Salman as well as the brand. Here are some selected reactions:

This will go down to History Books!!
Finally Durex will help break @BeingSalmanKhan ‘s Virginity!! #CongratsSallu

Well, Salman should have tweeted with proper information and it appears that trolling is not going to end sooner. What do you say?

Salman Tweeted Mujhe Ladki Mil Gayi & Everyone On Twitter Is Trolling Him
PM Modi Slammed Congress Like Never Before. Twitter Called Him A Roaring Lion & Joined In Trolling