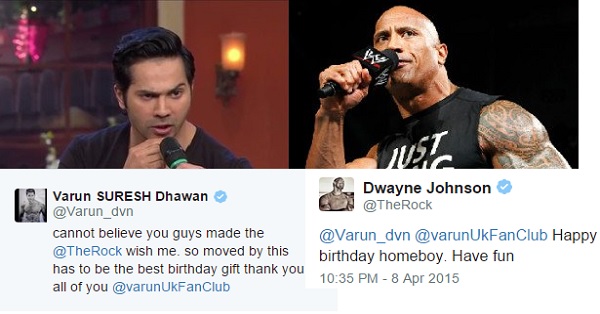 In Case if You Doesn’t Know it , Varun Dhawan the Upcoming Bollywood Superstar is one of the Biggest Fans of  Famous WWE Wrestler and Hollywood Actor “The Rock” aka Dwayne Johnson. Varun Dhawan has tried to Imitate “The Rock” couple of times, once in Comedy Nights with Kapil (Tune to 33:00) and one more time During the Youtube Fanfest. Varun Dhawan’s Fans from United Kingdom (UK) were Desparate to get a Birthday Wish from “The Rock” on his Birthday i.e on 8th April. They were tirelessly kept Tweeting to the Big man and Finally “The Rock” was Kind enough to Give a Reply to the Much Awaited Fans.

@varunUkFanClub Wish Varun a very Happy Birthday from me. He’s got awesome fans to care as much as you guys do. Great to see! DJ

Varun Dhawan was Elated with the Work of his Fans and termed it as the Best Birthday Gift.

The Rock was doing Promotions for his new Film “San Andreas” and when Varun Dhawan came to know that Rajeev Masand, Famous Film Journalist was going to Interview his Idol, he got a Special Video Message to “The Rock” and sent it with Rajeev Masand.

Check Out the Video Here:

Did You Like the Varun Dhawan’s way of Imitating the People’s Champ “The Rock” ??

Do Let us know your Views in the Comment Section Below.