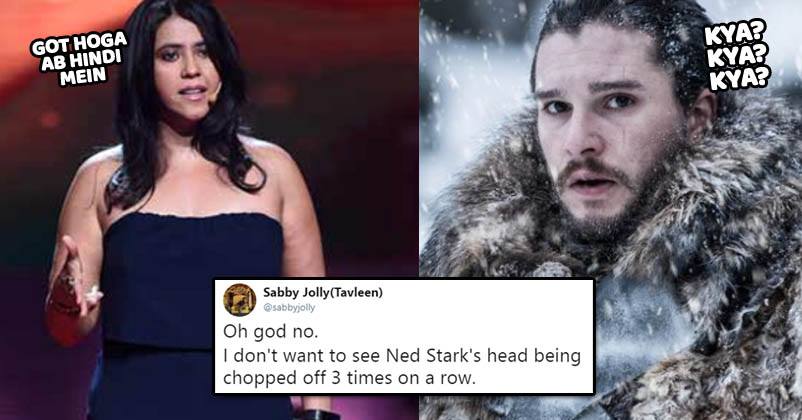 No doubt, HBO’s Game of Thrones is one of the best shows and is loved by viewers. It has shattered many records in terms of viewership.

The 8th season of Game of Thrones is already in process and we can expect the same to release in 2019 i.e. next year.

According to reports, the show will have many intimate scenes. If everything happens as per the plan, then the show would start in May.

Tellychakkar reported that her desi version would be highly inspired by GoT. Reports read, “Though not an official adaption, the project will have the feel and look of the medieval drama. It will have heavy dose of sex in it.”

Indian audience is confused as to how to react to this news; they have come up with hilarious responses on Twitter. Check it out;

I don't want to see Ned Stark's head being chopped off 3 times on a row. https://t.co/QvFsOblpqx

If Ekta Kapoor ever made a Hindi version of @GameOfThrones, these type of scenes will always be on loop. pic.twitter.com/qHfGgfkxUa

Ekta Kapoor announced she is going to make medieval drama like Game of Thrones.

I need someone to pinch me. This dream keeps getting weirder by the second.#ektakapoor

Ekta Kapoor is making desi version of Game Of Thrones. Just wondering whether it will be a laughter show (Of course one of its kind) or a daily soap type (saas bahu catch).

If this news comes out to be true, then people are surely going to have lot of fun.

Continue Reading
You may also like...
Related Topics:ekta kapoor, Game Of Thrones

We Made Live Video Call With Big B & Asked “Rekha Ji Kaisi Hain”. He Gave A Funny Reply
10 Bollywood Actors Who Were Very Famous In 90’s And 2000’s But Are Forgotten Now