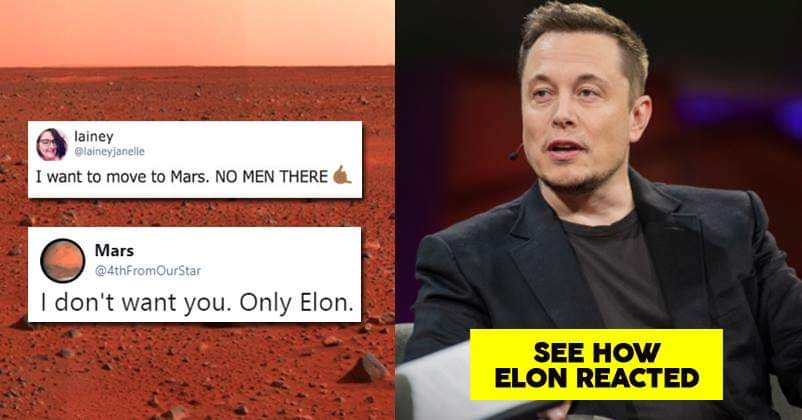 SpaceX CEO Elon Musk is a very known face in and out of the business world. Anyone who follows him on twitter will know how he feeds on humor everyday, basically memes and sarcastic tweets.

Elon Musk is a huge fan of the red planet.Recently a twitter conversation between the two showed how much they are into each other though it went to get bizarre at the end.

This is the reply to her tweet. Mars clearly stated that it wants only Elon Musk and no one.

I don't want you. Only Elon. https://t.co/NKxpkQQRyf

To which followed this weird set of conversational thread. Read them on.

I want you too baby https://t.co/Lxi0LQz5rc

When are you coming over babe? https://t.co/Vw8zjksfWi

Now, this particular reply by Elon Musk went out of the proportion and was too unexpected. Though he later deleted it, the screenshot of that tweet is still doing the rounds.

Check out the various memes and jokes that people are posting as this conversation between Elon Musk and the twitter handle claiming to be Mars went viral.

Did this man just make a No Nut November joke 👀

Will also prob be the first to nut on Mars tbh

But don't forget about this sexy planet, Elon. Much easier than a long distance relationship pic.twitter.com/3Q4HOV6TsG

DOWN CORN NUTS! DOWN!

This relationship is so toxic…

The birth of a new sexual orientation:

You must have forgotten the whole Earth-chan crisis.

Good call Elon!! At least shorts won’t claim you manipulated the stock price with this tweet!!

ELON WE APPRECIATE YOU BUT PLEASE CALM DOWN

So, you want to join in this comment thread as well?

Continue Reading
You may also like...
Related Topics:Elon Musk