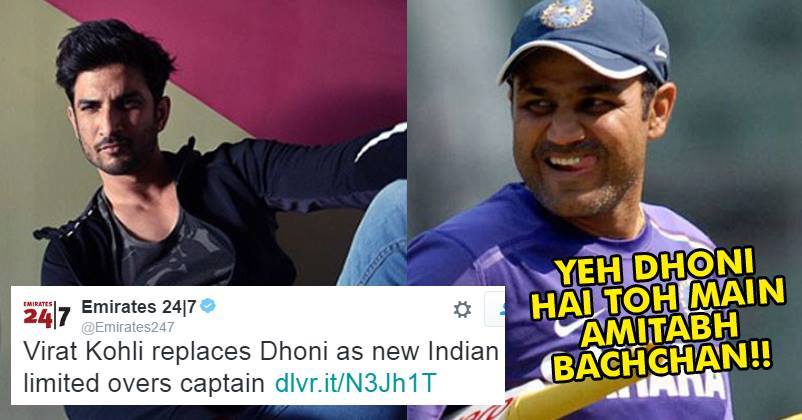 What makes us human, perhaps the mistakes that we commit in our lives. Social Media is a place where a person just can’t afford to commit a mistake as the penalty of it is just sheer ‘trolling’ for ages. Alia Bhatt knows that better. However, the master of trollers aka Virender Sehwag never leaves a single opportunity to troll anyone in a healthy manner. When the news of M.S Dhoni quitting the captaincy hit the Internet, various new channels and social media pages shared the story at large. One such media house, ‘Emirates 24|7’ had tweeted this.

Apparently, the picture of M.S Dhoni was replaced by Sushant Singh Rajput and it seems like the editors of Emirates 24|7 definitely had a tough time in their office. Sushant Singh Rajput recently played the character of M.S Dhoni in his biopic and it is quite understandable the reason for this mistake. Virender Sehwag soon noticed this fault and trolled the ‘Emirates 24|7’ with this tweet.

.@Emirates247 I am flying with you in a while , hope you don't allow him to board instead of me. pic.twitter.com/arF5WZ7qEf

That was indeed an amazing way to show them the mistake, however, the sarcasm and pun wasn’t suitable for a NEWS MEDIA WEBSITE but instead that would have been if Emirates 24|7 was an Airlines company.

No worries, we've got your back. We look forward to your next flight with us. @Emirates247 pic.twitter.com/lTzWQWeYFZ

Now all of this added to a big confusion, however, it was nice and funny to experience such a scenario where even the troller got trolled and the person who was trolled didn’t even notice it.

Have a look at people’s reaction.

Morgan freeman is not Nelson mandela

Morgan freeman is not Nelson mandela

Wasn’t that amazing? What are your views about his tweets and the whole scenario. Please share your opinion in the comment section below.