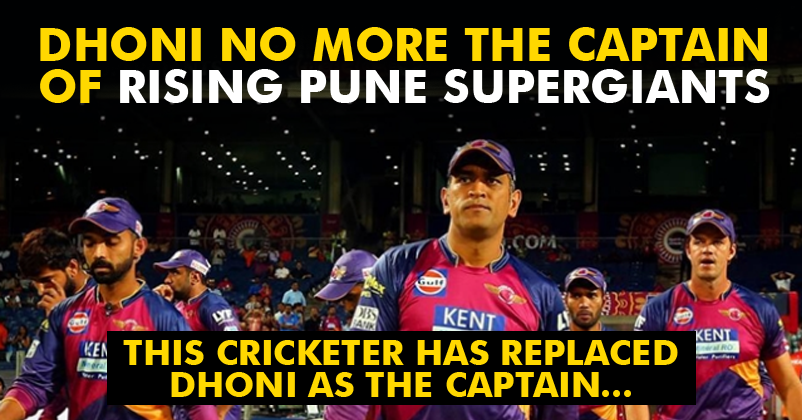 Every good thing has an end to it. After stepping down as the Captain of Indian National Team in every format, MS Dhoni has now been replaced by Steven Smith as the Captain of his IPL side, Rising Pune Supergiants. This decision was taken by the management of RPS in hope of a better finish in this season of IPL.

Dhoni had a miserable IPL-season last year as his side, Rising Pune Supergiants, finished a lowly seventh. Dhoni was criticised for his strange team combinations that did not allow Irfan Pathan to make it to the playing XI. The Rising Pune Supergiants are owned by the Sanjay Goenka group and are a temporary side in the IPL for the 2016 and 2017 seasons. Owing to this temporary status, Sanjay Goenka, the owner of RPS, stated that this season will be his only chance to pull off some sensational stuff in the IPL. He praised Dhoni but also stated that his side needed a younger captain and Steven Smith was, in his view, the perfect replacement. This is what Sanjay Goenka, the owner of RPS, had to say about the recent appointment of their new captain Steven Smith.

“Yes we have opted for Steve Smith as captain of RPS for the forthcoming IPL season. I have been thinking about this decision since the end of the last season and discussing it with my management team. And our thought is to have a younger captain at the helm of the team this year. We have a very good mix of youth and experience in the team and feel we need a young mind and a young captain with different ideas to spearhead Rising Pune Supergiants. We could have done much better. I have one more year as a franchisee owner and I want to give it my best. I have the luxury of two current international captains in my team. I feel Steve can make a difference. He will get all the support he needs to lead Rising Pune Supergiants. Steve is keen to make a difference and has already discussed things with Stephen Fleming our coach. He has fresh ideas and is a great player. I am confident we will do much better with a new captain at the helm.”

Goenka was full of praises for the captain cool and stated that he is a real asset for his team. He appreciated Dhoni’s cooperation level and also thanked him for his contribution.

This is how Sanjay Goenka praised Dhoni for his selfless cooperation!

“Mahi was cooperation personified when we conveyed the decision to him. I don’t need to tell you that he is a great player and captain and there is no doubt he remains a backbone of the team as a batsman and wicket-keeper. From Dhoni the captain I have learnt a lot. Especially his ability to remain calm under pressure. And we will need him to be at his best this year as player. In my opinion he is one of the sharpest minds I have known and will always be there to advise and help Steve.” Dhoni has been the most successful captain even in the IPL as he led Chennai Super Kings to two IPL and two CLT20 titles. Yes, Dhoni might not be the captain on paper anymore but he’ll always remain a leader who is ready to do anything for his team.

With the suspension of CSK ending after this season, we all can hope of Dhoni donning the yellow jersey and spreading the magic of his captaincy yet again in 2018. But as for now, we won’t be able to see Dhoni as a captain anymore. Do let us know what you think about Dhoni’s possible return in future in our comments section below.

Sania Slams Media For Focusing On Negative News Instead Of Her Entry Into Semis!
Shahid Afridi Has Announced His Retirement Again & Twitter Is Leaving No Chance To Troll Him