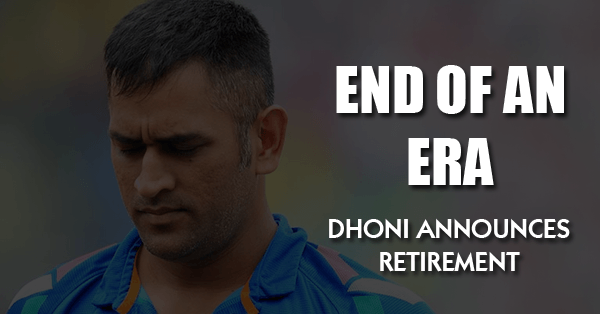 Nope You Guessed It Wrong THIS IS NOT AN APRIL FOOLS PRANK.

A Sad reality that M.S.Dhoni Finally announces retirement from all forms of the Game & that you would see him playing his last innings in the upcoming IPL. Dhoni today at a press conference held in Ranchi has announced his retirement and said that it had nothing to do with the World Cup. “Winning & Losing are part of the Game.. You cannot always expect us to win.. Australia was in a better position and the played a better game & thus they deserve to win” – he stated when he was questioned about the World Cup Semi Final. Also when he was asked about the reason for his retirement he stated –“It was well planned and informed decision & has nothing to do with World Cup.. I’m happy with the way my Team played and have no regrets”. Also M.S. Dhoni talking about his journey in his cricketing career he recollected 2011 World Cup and said that Winning World Cup for Sachin Tendulkar was the most beautiful moment.

He also spoke about the ups and downs Indian Team had gone through and said that the Team is Far More Efficient than what people think.

Dhoni even quoted that he is strong over his retirement and said that team RVCJ is just spreading rumors about my retirement to fool all you guys on this very special day of April Fools Day 😀 Sorry Folks!! Dhoni Isn’t Retiring This Was Just A Prank 😛 Happy April Fools Day!! 10 Hilarious Ways To Create Confusion
8 Salman-Driver Posters That Will Make You Go Rolling On The Floor!!!