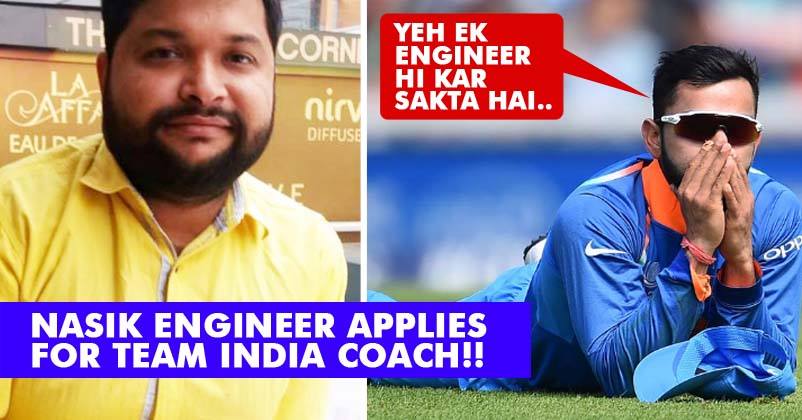 In the time of social media, it has become easy for people to get attention by doing weird things. Just look around, you will always notice something which doesn’t have any meaning or value but is getting a large number of reactions. Take an example of Dhinchak Pooja.

So what happened recently was that a mechanical engineer, Upendra Nath Bramhachari sent an email to BCCI and applied for the role of head coach in Team India. The content of that email has gone viral and if you read it will have you in splits.

As per the content, Bramhachari was not happy with Virat Kohli’s behaviour with former coach Anil Kumble so he wanted to join BCCI to teach Virat a lesson. In his hilarious email (full of grammatical errors), he has stated:

“After resignation of legendary cricketer Mr Anil Kumble I decided to apply (sic) the post of head coach of Indian Cricket team (men’s) as I feel captain of the team India (sic), Mr Kohli doesn’t need a legend as a coach.” “If the CAC select any former cricketer (as per the requirement of BCCI advertisement) as coach he will also be insulted by Virat (sic) outcome will be like Anil.”

Bramhachari then “explained” why he is the “perfect choice” to become India coach despite having no cricketing background!

“Because I can adjust with arrogant attitude and no legend can do so and slowly I will drag (sic) him (back) to right track and then BCCI can appoint a legend as head coach.

Well, that really sounds hilarious, but more than that, it looks an innocent and raw feeling of a cricket fan who was hurt by Virat Kohli’s behaviour with Anil Kumble. What do you think?