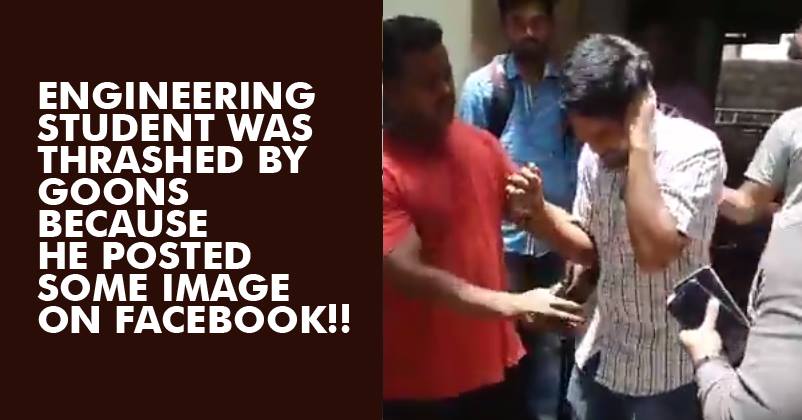 It is quite understandable that gulping down sarcasm and humor is not everyone’s cup of tea. For doing such things, a person does needs to have either one of them, but sadly if he doesn’t have it, you may land up being thrashed down by a bunch of douchebags.

A 22 Years Old engineering student ( Santosh/Sanjay ) was lately thrashed by half a dozen of people in the state of Karnataka for posting ‘derogatory comments’ against the Kanada Actors who have been actively participating in protest against Cauvery Water Dispute. The incident took place on Saturday near the victim’s college where he is completing his graduation.

Well, till now no one in the Media Houses can track down on that so called ‘derogatory remark’ that this young fellow made, but IF his ‘DEROGATORY REMARK’ comes out to be just nothing but a casual non abusive criticism, then the people behind this attack should be charged with various penalties. We can’t and should not consider his remarks are derogatory unless and until a clear picture doesn’t comes out.

A video was recorded where the whole act was caught which was apparently shot by the attackers themselves who were behind this incident. In the video you can see that the student is doing sit-ups and one particular man in black t-shirt slapping him really hard. He was also shown begging for mercy and apologizing by holding down his hands but they kept on slapping him.

This video has gone viral in internet which has been telecasted on many local media channels which has grabbed the attentions of many people who are now protesting against such ‘gundagardi’. AIADMK spokesperson C R Saraswathi told TOI, “Violence is not the solution. People of both states have to face issues in a compassionate manner.” DMK MP and party spokesperson T K S Elangovan urged the Karnataka government to take legal action against the assailants. According to some media reports, the attackers wanted to take Santosh to a Police Station but Girinagar police refused to file a complaint.

At first Santosh/Santosh denied to file a Police complaint. “We would have registered a case if he was ready to file a complaint. We came to know of the incident only when a news channel reported about it,” a senior police officer said, denying that the boy was brought to the police station and that the attackers let him go following the apology.

However a case has been registered against the attackers, Karnataka Chief Minister Siddaramaiah said in a tweet. He had also said that he would write to Tamil Nadu Chief Minister Jayalalitha following the attacks on the restaurant in Chennai and the vandalising of buses and other vehicles in Ramanathapuram and Rameswaram. This is not the first time that a violence has erupted in the state of Karnataka for the Cauvery Water Dispute. Many such incidents have been reported where the people belonging from Tamil Nadu are beaten up and abused.

What do you think about this whole story ? What were those derogatory remarks that he made against the actors, were they too abusive ? Or was it too much to take this small troll to such a level and beat a normal student for his actions ? Write down your opinion in the comment section below ! !

BJP Leader’s Son Thrashes Bikers Because Of Not Giving Him Just Enough Space To Drive ! !
You Will Not Believe Your Eyes After Knowing The Brain Behind “Acche Din” Slogan