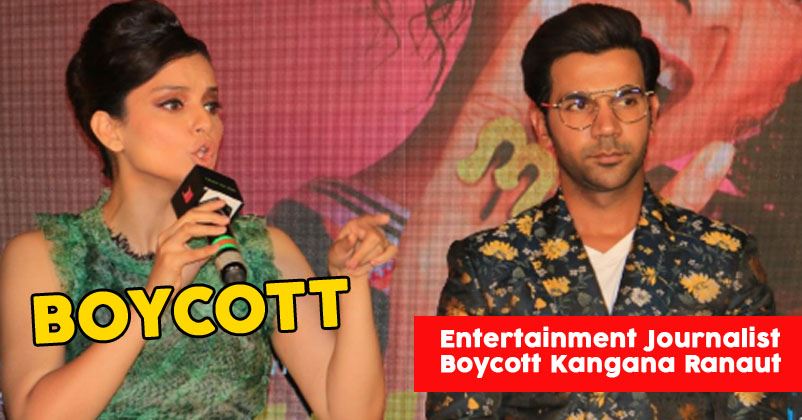 The controversy queen of Bollywood Kangana Ranaut recently got into a war of words with a journalist at the music launch event of her upcoming Judgementall Hai Kya. The National Award Winning actress accused a reporter of giving negative reviews to her movie Manikarnika and she also claimed he is running a “smear campaign” against her.

After the hot talks between Ranaut and the reporter, the Entertainment Journalists’ Guild of India has decided to boycott Kangana. The Guild also demanded a public apology from Kangana as well as her upcoming film’s producer Ekta Kapoor.

While Kapoor has already agreed to issue the apology, Kangana is in no mood to back off or apologize. The delegation sent a letter to Ekta which read, “We, as a guild, have collectively decided to boycott Ms. Ranaut and not give her any media coverage.”

Soon after her boycott news surfaced on the internet, Kangana’s sister Rangoli Chandel tweeted a video of Kangana bashing the journalist. In the video, Kangana made it clear that she is not going to bow down to anyone when she is right. And about her boycott, Kangana said, “bring it on”.

Here’s a vidoe message from Kangana to all the media folks who have banned her, P.S she has got viral fever hence the heavy voice 🙂…(contd) pic.twitter.com/U1vkbgmGyq

Did Dhoni Tear Up After He Got Out? Twitter Says Yes
Shakti Kapoor Asked About Shraddha’s Wedding, The Yesteryear Villain Has The Wittiest Reply