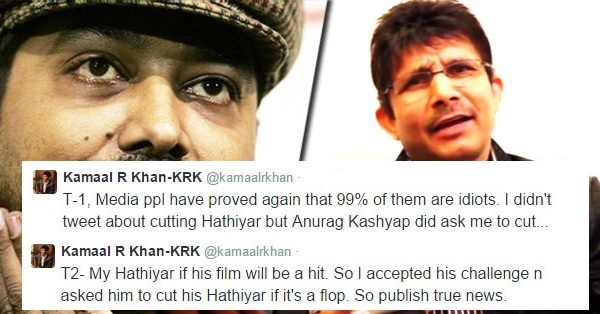 Our very talented actor, producer and critic KRK is often found passing bizzare comments on fellow actors and actresses and also predicts the performances of the upcoming movies. Now here’s what happened when he tweeted some explicit comments about director Anurag Kashyap’s film ‘Bombay Velvet‘ before its release. KRK stated that this film would be a big flop and Anurag would chop off his “hathiyaar” after the movie releases. Anurag Kashyap responding to KRK’s tweets in front of the media.
Image Source

Unfortunately, ‘Bombay Velvet’ did not do well at the box office, here is the insulting spree on the micro-blogging site twitter started by KRK

These are some tweets by KRK prior the release of Bombay Velvet:- Let us know who cracked you up the most!!