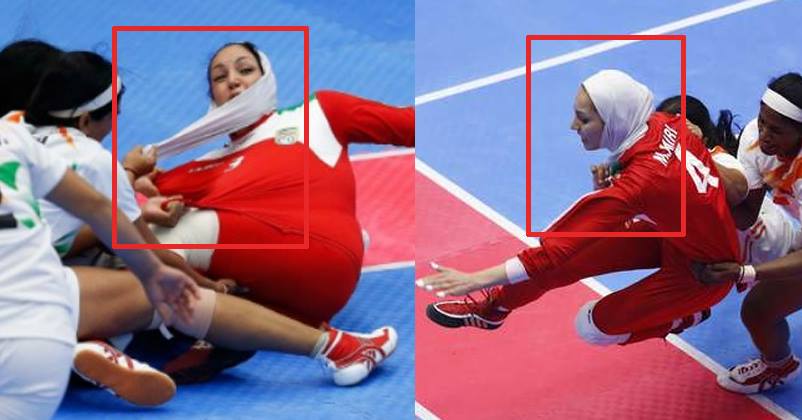 Winning is not the only important thing in sports, sportsmanship and respect for your opponents also matter a lot. This statement perfectly suits the Indian women’s Kabaddi team which participated in Asian Games 2014; their one gesture won them a million hearts.

In the finals of 2014 Asian Games, Indian women’s Kabaddi team was facing Iranian team in the finals. While contesting, an Iranian player’s hijab got displaced and she was very uncomfortable as it is a part of their culture.

The Indian team may have used this moment in their favor by easily overcoming her but what they did was just awesome!

Players of Indian women’s Kabaddi team decided to help her in covering the face and put her hijab back in place. Here we should not forget that this was the finals and it was really a matter of prestige for the Indian team as Kabaddi is their own game and they just couldn’t afford to lose. Considering these facts, what Indian players did proves that sportsmanship and humanity are still alive. This match was won by Indians by 31-21 and without a doubt, we can say that Indian women’s Kabaddi team also won million hearts for their beautiful gesture that day. Salute to the women’s Kabaddi team of India for this unforgettable moment!

Dhoni’s Magic! He Hit The Stumps Even Without Seeing & This Is UNBELIEVABLE!
English Cricketer Lost His Artificial Leg In The Middle Of A Game, Still Saved A Boundary