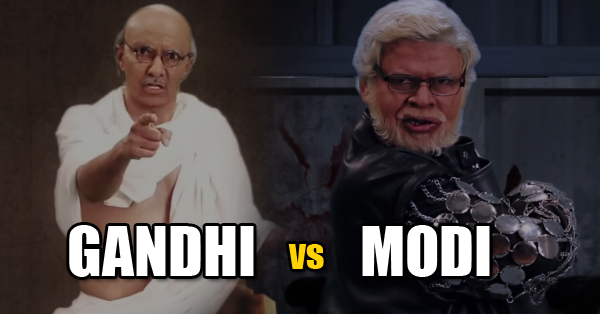 MODI & Mahatma Gandhi
Whats the first thing comes to mind when both these names are taken together? GUJRAT!! Both were from Gujrat. Both managed to drive entire nation along with them. One did it with Non-Violence and ruled out British Rule from India & other did it with Campaigns & ruled out Congress from India. When it comes to leadership both the names will be taken with due respect.
But ever thought what would be the situation if they face each other in a Battle? And what if the battle is not a normal one but a RAP BATTLE?
This super hilarious video by SHUDH DESI RAPS managed to show us the similar picture on what happens when both these legends indulge in a Battle.
NOTE: THIS VIDEO IS NOT FOR THOSE WHO GET OFFENDED EASILY!! Watch It only if you don’t get offended!!

Did you like the video? What do you think who won the battle? Mahatma Gandhi or Narendra Modi? Share your views on the video in the comment below.

Sholay Completes 40 Years : These Hidden Facts Might Surprise You
This Guy Like All Of Us Went For Haircut. What Happened Next Melted My Heart