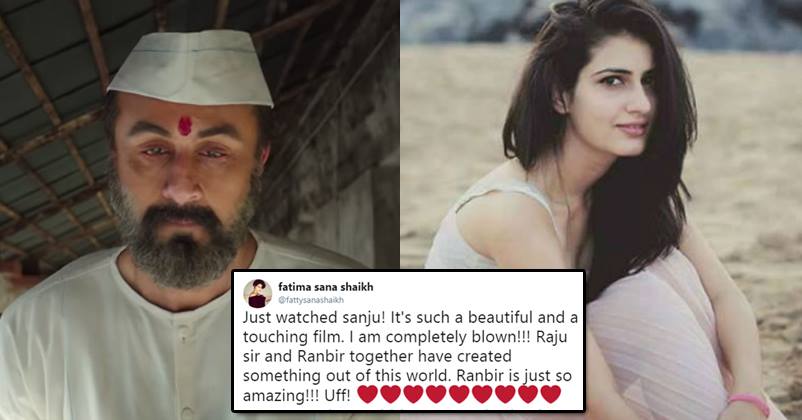 “Sanju” starring Ranbir Kapoor in the titular role hit the theatres today and is receiving accolades from fans and critics alike. It is a biopic of popular Bollywood actor Sanjay Dutt and depicts different stages of his life in a perfect manner.

Quite amazingly, Sanjay Dutt himself had tears in his eyes after watching the movie and he hugged Rajkumar Hirani and Ranbir Kapoor. He is actually so impressed with the biopic that he asks the filmmaker Hirani to make its sequel as he has many stories to tell.

The movie is being applauded for its strong content, heart-touching portrayal of Dutt’s life, mind-blowing performances and of course an incredible direction by the jewel of Bollywood who has given the industry several masterpieces like “PK”, “3 Idiots”, “Munna Bhai MBBS”, “Lage Raho Munna Bhai”, etc.

Check out celebrities’ review of “Sanju”:

Just watched sanju! It's such a beautiful and a touching film. I am completely blown!!! Raju sir and Ranbir together have created something out of this world. Ranbir is just so amazing!!! Uff! ❤️❤️❤️❤️❤️❤️❤️❤️❤️❤️❤️ #sanju #ranbirkapoor #RajuHirani

@chintskap What a tour de force performance #Ranbir Kapoor in #Sanju takes your breath away in creating the the amazing likeness to #SanjayDutt without ever slipping up on the authenticity of the emotion. BRAVO. 👏👏He is ably supported by @vickykaushal09 endearing portrayal.👍

Sir you have proved that you are the best student time and again. You tell stories with so much flair and truth passion and hardwork that no examiner can judge your films. Watched #Sanju twice already and it's incredible moving with its emotions and fimess. Love https://t.co/ykKQxuaWZW

Every 3 years this quiet unassuming man gifts us with his ‘giant of a baby’. In 15 years this is his 5th. Glad you take your time Raju. Its well worth the wait! Its #Sanju day!!!!!@RajkumarHirani

#Sanju a story that teaches you to face your hardships with courage and be unapologetic for who you are! Amazingly picturized by @RajkumarHirani sir & Ranbir bhaiya, you’ve OUTDONE yourself! 👏 pic.twitter.com/vEuQUVRHC7

Saw the most awaited film #Sanju last night. What a film. It takes you to a journey of laughter,tears, joy,melody,human relations. @RajkumarHirani excels once again. #RanbirKapoor s performance is outstanding & so are all other actors. SUPER HIT. pic.twitter.com/t8j4QHaxWD

#Sanju First half- MINDBLOWINGLY FANTASTIC. #RanbirKapoor as Sanjay dutt is ICONIC & @vickykaushal09 is the soul of Sanju..

#SanjuReview A Work Of Outstanding Artistry! 🌟🌟🌟🌟1/2!!! @RajkumarHirani knows how to absorb you in his storytelling, where to make you laugh and cry. Nobody but only #RanbirKapoor could have delivered this brilliant portrayal of #SanjayDutt. @VVCFilms @foxstarhindi #Sanju

Did you watch “Sanju”? If not, book your tickets ASAP because such marvels are not often made in Bollywood.

Reporter’s Mom Sent A Good Luck Charm For Messi. What He Did With It Left The Reporter Speechless
Deepika Padukone Was Asked To Go Through B**b Job. Here’s What She Did