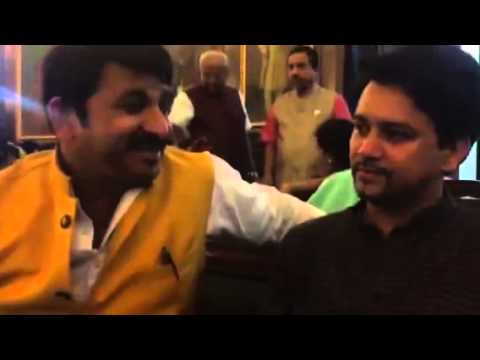 MPs of BJP seem to be as excited and overjoyed for the team India as the rest of the nation and citizens. It is for this only that they have turned into a lyricist and wrote a song for the victory of Indian cricket team and Dhoni. At least the video tells us this only. Quite naturally, cricket has rose far above and become a religion more than a sport in our country. Besides, our players have won quarter final too in ICC World Cup proving their potential and valor. Now if such is the enthusiasm and thrill, everyone’s passion and extreme attention together with the best wishes are usual.

Talking of the MPs of Bhartiya Janta Party, craze and love of Manoj Tiwari along with Anurag Thakur became apparent on Friday when they sang a beautiful rhyme to cheer Dhoni and Indian cricket team that has made its place in the semi-final of World Cup. Except these MPs, Supriya Sule as well as Meenakshi Lekhi could be seen too encouraging India.

Robbed In Daylight Publicly – How Many Of Us Stand For Help In Such Situations?
When Girl’s Bathroom MMS Turns To A Lesson For Everyone