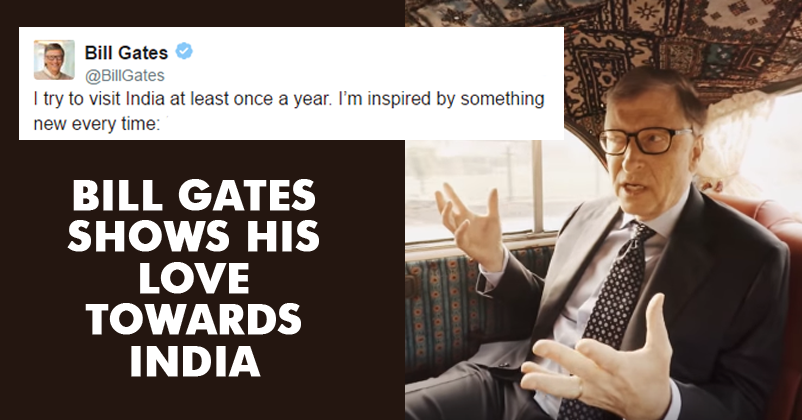 India is truly incredible and there’s not the least doubt about it but are we mentioning it here? Well, Bill Gates, co-founder of Microsoft and the richest man of the world, has lately visited the country and seems to be highly impressed with it. He has shared some photos as well as videos from his visit and one of the pics shows him in an autorickshaw around India Gate but what has made it special is the caption Gates wrote while sharing the pic on Twitter and Facebook, “I try to visit India at least once a year. I’m inspired by something new every time.”

I try to visit India at least once a year. I’m inspired by something new every time: https://t.co/lKUrPiffeI pic.twitter.com/Lp8Do3mh0a

It was natural for such a tweet by the business magnate to go viral; it got more than 16K likes and 4.8K retweets ever since it was posted.

In Gates Notes, his personal blog, Bill Gates has appreciated Indian Prime Minister Narendra Modi on account of his “ingenious ways of tackling” the issue of sanitation through Swachh Bharat Abhiyan (Clean India campaign). He also referred to Modi’s speech which he gave 3 yrs ago on the Independence Day and wrote,

“I can’t think of another time when a national leader has broached such a sensitive topic (open defecation in the country) so frankly and so publicly.”

Indian Prime Minister @narendramodi put a spotlight on a subject that most of us would rather not even think about: https://t.co/oUX40Igi6G pic.twitter.com/mJnCwhbo4U

“What I love most about Clean India is that it identified a big problem, got everyone working on it, and is using measurement to show where things need to be done differently.”

He even made a video to show sanitation’s improvement in India: Gates, in his blog, writes, “the people of India are demanding change,” adding that they want to work in the direction of positive results. He went on to say,

“It is a great example for other countries and an inspiration for all of us who believe everyone deserves a chance at a healthy, productive life.”

People also positively commented on his post and here are few of the comments!

What do you have to say with regard to this? Share your views in the comments section below.

Nothing Can Describe “Bin Bulaye Mehman” Better Than This Hilarious Video & We Bet You’ll Relate To It!
Akshay Slams Youth For Committing Suicide For Just Failing An Exam, Says Rather Go To Border