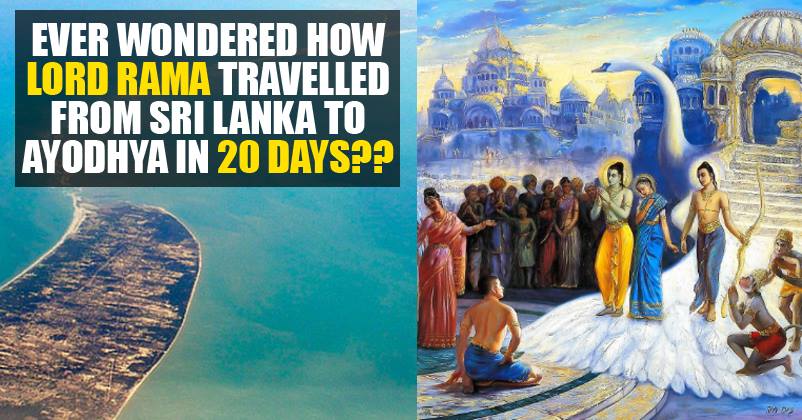 Today one of the biggest clashes that our world is witnessing is the clash between atheists and believers. Each of them has their own opinions when it comes to addressing various mythologies. For some, it’s not a mythology but the factual happenings and for some, it’s just a fictional book. Well, the opinions of each of groups need to be respected unless and until they don’t pull it down to any demeaning state.

Diwali is a festival of light. joy and happiness. It symbolizes the victory of good over evil. On this very day, Lord RAMA came back to his native place AYODHYA after 14 years of exile and an epic saga of war which changed the history of the world. His entire journey has been written down in our holy book, RAMAYANA.

I don’t want to extend this article by writing everything about Ramayana, but in short, we all know and have been taught that after the war against Ravana, Lord Ram came back to his kingdom ‘AYODHYA’ in just 20-21 days. Now I don’t want to offend anyone, but traveling roughly 2600 km all the way from Sri Lanka to Ayodhya seems a tad bit odd given the fact that the means of transport back then wasn’t so advance like today.

However, a recently a picture went viral on many social media platforms which justified this equation in a much legit manner. It was a screenshot from Google maps which showed the time and distance appropriately for the route from Sri Lanka to Ayodhya by walk. Funny, eh, do they trust Google more than our mythologies ? Just so as to set up the equation, the distance between Sri Lanka to Ayodhya is roughly 2500-2600 km out of which the sea distance between the Sri Lanka (Talaimannar Pier) to India (Dhanushkodi Ram Sethu point) is roughly 50-55 km. Now, the exact place where the battle was fought isn’t clearly mentioned, hence I would like to generalize the equation of covering distance within Sri Lanka to roughly around 200-300km. Have a look at the screenshots for better understanding. Now the only means of PRACTICAL fast transport back then were horses. So traveling 2545km on horses (subtracting the sea route – 55km) for 20 days makes a rough equation of 127km per day. Also, let me put this on the fact list that back then there was no NATIONAL HIGHWAYS as per suggested by Google.

On an average, a horse can travel up to 30-40 km at a stretch. But since Lord Ram was a king, it is unlikely that he would possess such NORMAL horse. He must be having the best of the horses in the entire world. Such horses are expected to have the stamina of traveling roughly around 80-100km in a single day provided you feed them well on regular intervals, which does take TIME !

Even through this equation, a 20 days journey with 100 km per day speed still makes it to only 2000km. Still 545km left ! ! The only way to cover such big distance is to travel at more speed, more than 100km per day. But even the best of the horses can’t do that on their own for such a long time (20 days). The only practical way to travel such a big distance through horses is to change them at regular intervals from various points. We need to note that Lord Rama had well wishers and friendly kingdoms all along his way to his kingdom AYODHYA, hence it is quite possible that the rulers of these kingdoms would have been offered him their best horses who were at fittest of their strength. And hence the target of 127 km per day isn’t that difficult. So this is how, our Lord RAMA might have traveled all the way from Sri Lanka to Ayodhya. Another theory revolves around Pushpak Vimaan. The Pushpak Vimaan was a mystical aircraft which Ravana had possessed. When Lord Rama won the battle against Ravana and crowned Vibhishana as the king of Lanka, he was offered to use the Pushpak Viman for his means of travel. According to mythology, Pushpak Viman had the ability to always provide an extra seat no matter how many people travel in it. But this theory doesn’t really sound logical. However, there are many points which I left out. Lord Rama didn’t start off his back journey to his home as soon as he killed Ravana. He did crown Vibhishana as the king of Lanka which is generally known as Raj Abhisek. That might have taken some time. However, some people say that Lord Rama didn’t attend the event because of his Vanvas.

So this article stretched a bit longer and might have consumed your time, but that’s the least you should pay for knowing you culture and mythology. Please share your opinions in the comment section below. Happy Diwali from RVCJ TEAM !

This Girl Took Such Revenge On Cheating Boyfriend That He Won’t Forget For Next 17 Yrs
Indian Shooter Heena Sindhu Forced To Wear Hijab! She Withdrew Her Name From The Tournament