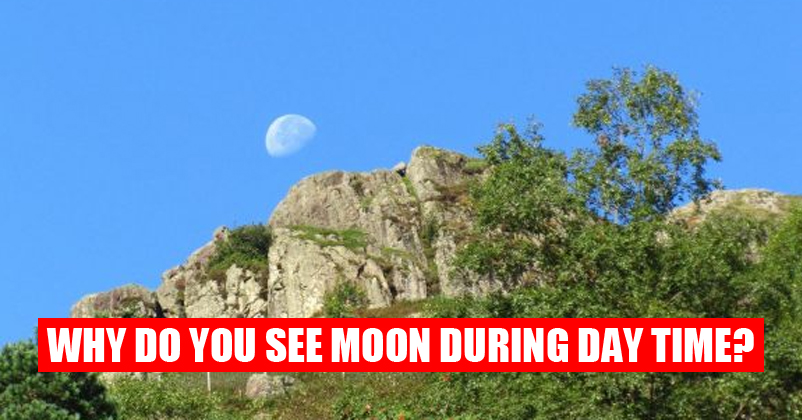 Have you ever thought about why moon is still visible during the 1st half of the day even though we did say it good night just a couple of hours ago ! ! So the Moon being visible during daytime is quite a normal sight for many of us. It’s very unlikely that the Sun will ever take the burden of doing his job for extra hour in the office. Quite rude, duhh ! !

A very common misconception among people is that the moon is directly opposite to the sun in the sky. But in actual reality the moon is only in this position for a single instant in the whole lunar month and that is only during the full moon, when it is exactly 180 degrees away from the sun. The rest of the month it can be anywhere ranging from 0 to 180 degrees away. Now the first possibility for the moon to be visible during daytime is that the light emitting out of the moon should be strong enough or bright enough that it penetrates through the scattered blue light of the sky.
If you ever try to look at exactly the right spot with a telescope, you can also see Mercury, Venus, and Jupiter in daylight, plus a few of the brightest stars. Now the second possibility for the moon to be visible in the sky is that it needs to be above the horizon. On average, the moon is above the horizon for about 12 hours a day. Some of those 12 hours are bound to coincide with the sun’s thus producing a daytime moon.

Some Facts About The Moon, Damn wait, The Earth’s Moon. Continue Reading
You may also like...
Related Topics:daytime, moon

So Did You All Enjoy ‘Sultan’? Well, There’s A Super-Duper News For All Of You
Here Is Why Indian Fans Have Just 3 Blades Whereas American Fans Have 4 Or Even More