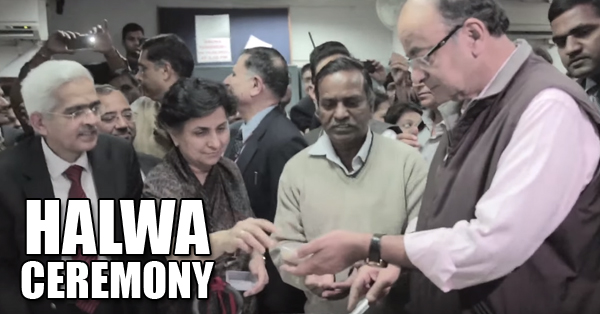 Arun Jaitley, Finance Minister is all set to deliver his second Union Budget on 29th February. The preparation of Budget will begin 10-15 days prior to the announcement of Budget in Parliament. These preparations include printing the necessary documents.

This printing of documents and other necessary stuff will begin with “Halwa Ceremony” which is considered as a ritual and it is one of the old traditions followed by the Government of India. In this ceremony, Halwa is prepared in a large frying pot and is served to the entire Finance Ministry in the North Block office.

Arun Jaitley, his deputy Jayant Sinha, Revenue Secretary Hashmukh Adhia, Finance Secretary Ratan Watal and other key officers along with the staff were present at the Halwa Ceremony this year. This ceremony took place on February 19th, 2016. This commences the Printing of the General Budget 2016-17.

After the Halwa ceremony, all the staff of the Finance Ministry need to remain isolated and will stay in the North Block office till the Budget is presented in the Parliament. Apart from higher officials, all the other staff members will remain in the North block and they are cut off from their families in this period. No sort of communication like phone, messaging or e-mail is allowed during the lock-in period.

The lock-in period is to ensure the secrecy of the Budget preparation. The significance of Halwa Ceremony is – It is considered as an Indian tradition to eat something sweet before starting an important work.

Have you ever heard about this Ceremony? Do share your views in the comments section below.

Continue Reading
You may also like...
Related Topics:Arun Jaitley, Budget, Budget 2016, Everything You Need To Know About The "Halwa Ceremony" Before The Union Budget Comes Out!!, Finance Ministry, Halwa Ceremony, North Block, Parliament, Printing

This Company Is Going To File An FIR & Defamation Case Against Ringing Bells
WTF! You Won’t Believe What BSNL Did With PM Modi & You’ll Go ROFL Once You Check Out