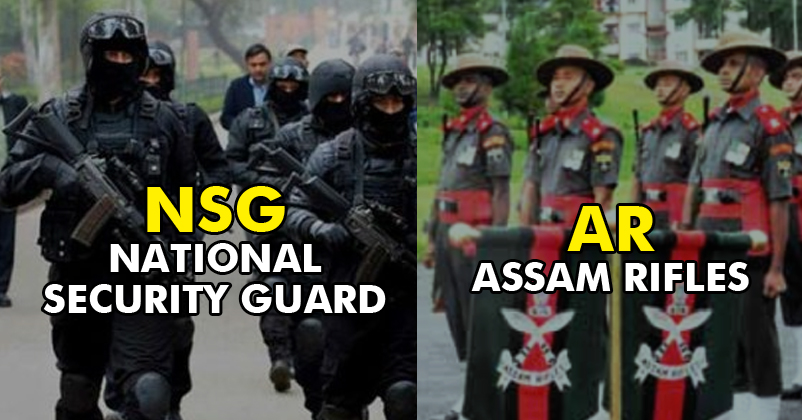 The Paramilitary forces (also known as Central Armed Police Forces) play an important role in internal security and also border security. There are seven Central Armed Police Forces and they come under the control of Ministry of Home Affairs. The seven armed forces include AR, BSF, CISF, CRPF, ITBP, NSG, SSB. Over 10 lakh are serving in these 7 armed forces. Each of these armed forces is led by an IPS officer except Assam Rifles.

Here presenting you the detailed explanation of each armed force.

Established in 1835, Assam Rifles is the oldest of all the armed forces. Presently, there are 46 battalions of Assam Rifles under the Home Ministry. Assam Rifles play a crucial role to counter North-East insurgency. Since 2002, Assam Rifles are also guarding the Indo-Myanmar border comprising of 1,643 Kms. BSF came into existence during the Indo-Pakistan war of 1965 to ensure the security across the borders of India. Approximately 2.4 lakh personnel are serving the country in this force. BSF is also called as “First Wall of Defence of Indian Territories”. They also guard the borders of Jammu & Kashmir along with the army. CISF came into existence in 1969. With a capacity of 1,65,000 personnel, CISF is the largest industrial security force in the world. CISF provides security to Public Sector Undertakings (PSUs). The production of Indian currency note presses is safeguarded by CISF. They are also seen guarding at the airports. CRPF was established in 1939 for providing internal security. CRPF counters Naxal operations of both State & Union Territories in order to main law and order. They are seen controlling riots in different parts of the India. CRPF were used during the Indo-Pakistan border until BSF was created. It was the CRPF troops that killed 5 terrorists during the 2001 Parliament attacks. ITBP was established in 1962 after the India-China war. ITBP guards the northern borders and the areas along the mountainous regions of Indo-Tibet & Indo-China borders. ITBP personnel are also trained in disaster management and are deployed in UN peacekeeping missions. NSG was established in 1984 to tackle terrorism. The formation of NSG was a consequence of Indira Gandhi’s assassination and operation Blue Star. They are also known as Black Cats. NSG personnel are specially trained & equipped to tackle the exceptional situations. They played a crucial role in the 26/11 Mumbai Terrorist attacks. SSB was set up in 1963 to guard the Indo-Nepal and Indo-Bhutan borders. SSB was formerly known as Special Service Bureau. SSB personnel are also seen guarding the polling booths during elections. Salman Khan Made His Co-Star Amit Sadh Very Happy By Gifting Him Something Special
Manish Paul Is Getting Paid More Than Bollywood Actors For Hosting Jhalak Dikhhla Jaa 9!