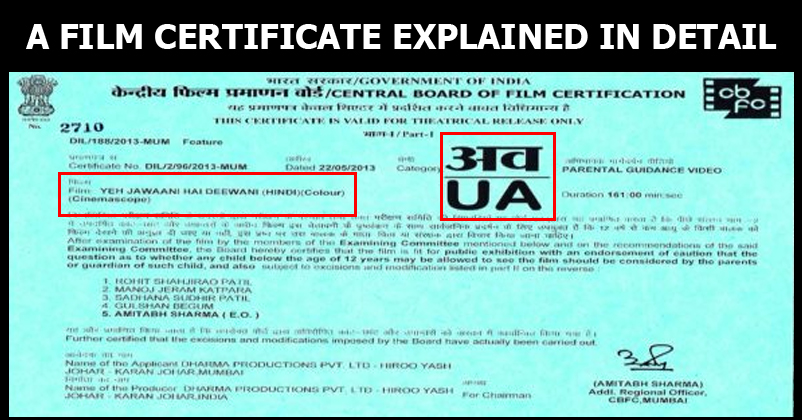 The Central Board of Film Certification (CBFC) or commonly known as Censor board is a censorship body which comes under the Ministry of Information and Broadcasting. This body gives certifications to films, television shows, television ads etc which are to be released or displayed in public. Films can be released only after getting certification by Censor Board. CBFC of India is considered as one of the most powerful Censor boards in the world due to its strict rules. Pahlaj Nihalani is the current chairperson of CBFC and they are headquartered in Mumbai.

Have you ever wondered what does each element in the CBFC certificate mean? To solve this question here presenting you the detailed breakdown of a Film certificate.

1. This certificate should be shown for at least 10 sec before screening the film

Different type of ratings in film certification are U, U/A, A, S each of these are explained below.

2. U – Unrestricted (i.e. anybody can watch the movie)

Theatres are responsible for not allowing children to ‘A’ rated films

7. Duration of the film

8. In some certificates, duration is replaced with length of the reel

9. Validity of the certificate

In this case, it is valid for Theatrical release only.

10. It gives information about Certificate Number, Location of Censor board office & Year of Certification

11. List of Censor board officials who examined the film

12. Name of the Producer and name of the Applicant

13. Indicates the part of the certificate. Part – 2 is available only for movies which are recommended for cuts by the censor board.

Generally, ‘A’ rated movies will have Part – 2.

14. Triangle symbol indicates that cuts are suggested for that particular film. If the movie has no cuts then the symbol will be absent on the certification

15. This is the Part – 2 of the certificate with a detailed list of cuts Next time when you watch a movie with your friend, don’t forget to share this information with him. Do let us know your views in the comments section below.

Top 10 Automobile Companies In The World.!!
World’s Most Beautiful Chess Player Is All Set To Check-Mate You With Her Cute Looks!