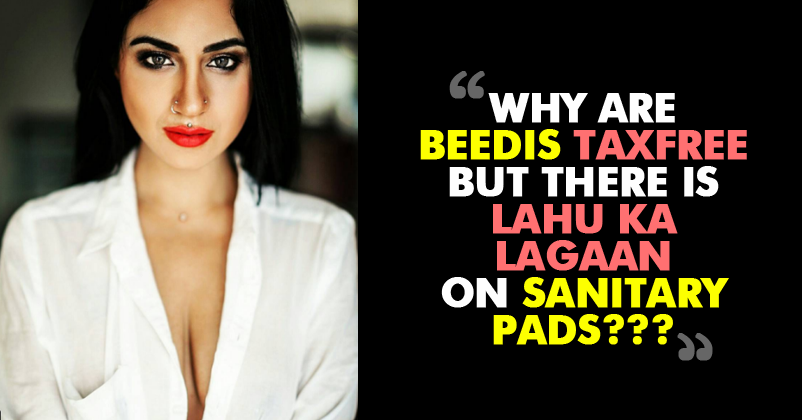 Bigg Boss 9 contestant Priya Malik is known for her fierce and bold personality. Not just on the reality show but also in her real life, she is extremely brave.

She has never really shied away from expressing her strong opinion and valid perspectives on concerns of a woman.

She took an offense on censoring a bra scene in the movie Baar Baar Dekho, she voiced her disgust against the step with her braless photo on Twitter. The actor turned activist is now trying to make sanitary napkins tax free for all the right reasons. She has raised a concern through her Twitter account and started a hashtag #LahuKaLagaan.

She tweeted to Finance Minister Arun Jaitley and highlighted the fact that if beedis can be tax-free then why not sanitary napkins. Only 12% women population can afford the napkins while 88% are doing away with unhygienic methods of plastic, fabric, sand and dry leaves.

Here are the series of Tweets by Priya Malik:

When she puts forward her thought to Arun Jaitley

Hi @arunjaitley when contraceptives are tax free then why not sanitary pads?Only 12% of Indian women can afford #LahuKalagaan @SheSaysIndia

An essential, important fact which we cannot ignore

Thanks to #LahuKaLagaan,88% of Indian women still use fabric, plastic, dry leaves and sand during their acche din @arunjaitley @shesaysIndia

Of course, a woman is complete with the ‘Shringaar’ and what about her menstrual days?

If Kumkum, Bindi, Alta and Sindur are tax free then why not sanitary napkins? Shringaar ka Adhikaar lekin #LahuKaLagaan ? @SheSaysIndia

What importance Beedis serve in this big world that sanitary napkins don’t?:

Hi @arunjaitley why are beedis tax free but there is #LahuKalagaan on sanitary pads?Jigar maa badi aag hai,literally speaking @SheSaysIndia

Expenses incurred by a woman on sanitary napkins. They are taxed up to 14.5% depending on states! No to #LahuKaLagaan! @arunjaitley pic.twitter.com/k1GawlewDD

Here’s the photo (in case you miss the tweets) We are totally rooting for Priya Malik and we hope the Finance Minister hears her appeal out. This will bring a major change. Most of our women population will have access to better hygiene during her essential 5 days of the month. We all need to stand united on this one.

Sunil Grover And Ali Asgar Team Up For This Reality Show! They Won’t Return To TKSS Now?
Sunil Grover Supports Sonu Nigam In The “Azaan” Controversy With A Meaningful Tweet!